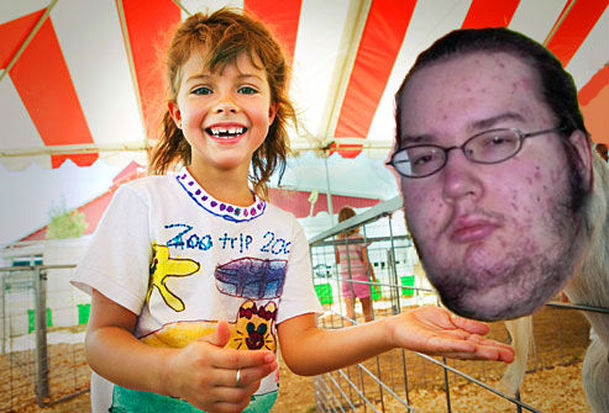 August 6, 2014 – Mulberry Lane Petting Farm in Sherwood, Wisconsin has reopened this season featuring an exciting new exhibit: for the first time, children of all ages will get to meet, pet, and feed domesticated internet trolls, using special feed containing impotent anger, self-righteousness, and a healthy dose of capital letters.

The internet message board trolls, bred primarily for YouTube commentary by Mulberry's caretakers, were formerly considered too volatile to allow near children. However, in today's internet age, where kids are exposed to these online instigators at progressively younger ages, the owners felt it was important to provide a safe environment for them to see these ill-mannered animals up close, and tussle their unwashed hair.

“It's easy to look at a troll and say, 'Who would want to breed such an ugly, illiterate beast?'” said Patrick Keyes, co-owner of Mulberry Lane. “While hideous, we at Mulberry know that it is not the place of humans to cull nature of even its most reviled creatures. Therefore, we decided it was important to raise them ourselves, provide them with laptops, and teach kids how to nourish them with upset responses to their non-constructive monosyllabic bile.”

Each troll is raised from infancy by the farm to ignore the majority of its education and to find fault with even the most innocuous of subjects, such as cat videos or cereal commercials. When families arrive at the farm and the trolls begin bleating for attention, each child is given a handful of contrary talking points and statistics which, while meaningless to the troll, will provide the basic sustenance allowing it to comment further.

“We have had trouble getting the trolls to breed,” admitted Keyes. “It's hard enough finding females, and harder still to get the trolls interested in each other when they're busy insulting teenagers in World of Warcraft or Halo. It's typically easier to find trolls in the wild, abandoned by parents who clearly gave them too little attention to begin with.”

So far, the exhibit seems to be a major hit with visitors. A child who fed the trolls early Wednesday giggled happily when one called him a fag and said no one likes him, then turned to his mother and asked if he could feed them again.