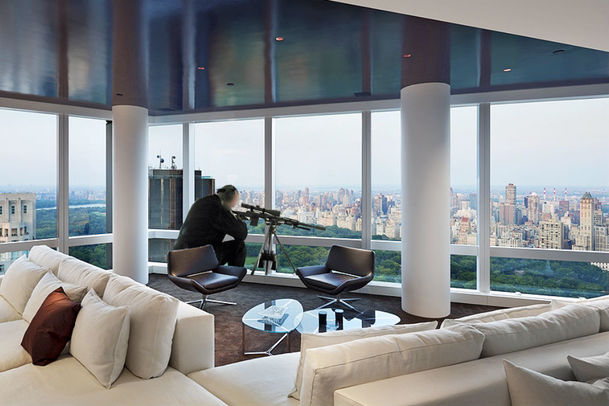 May 15, 2015 – Sales of multimillion-dollar properties more than doubled in Manhattan last year, and now eccentric billionaires are seeking out more unique perks. Among other bizarre benefits, a $95 million condo in Central Park West's Vice Tower comes complete with a built-in sniper's nest on the eastern view side, recommended for use against bikers and the homeless.

The loft, which recently sold to Czech billionaire Miklos Jankovic, will be enjoyed by his daughter Helenka while she attends classes at NYU. The family settled on the residence, they say, because of the beautiful views of the park on one side and of the Hudson on the other side, and because firing on pedestrians from 80 stories will be wonderful stress relief following Helenka's studies.

“Honestly, this condo is far nicer than anything we have in the Czech Republic, so we'll be visiting our daughter often,” Jankovic told city reporters. “I'm particularly excited to take a crack at those Citibike tourists, plus the downstairs pool plays music underwater!”

Average home prices in New York have actually stayed about the same over the past decade according to appraisal firms, but the sale of luxury lofts to national and international parties continues to rise. Real estate firms are thus attempting to outdo each other with unusual amenities, including a “Crane Game” loft at Columbus Circle from which skilled residents can pick up working class Manhattanites and drop them into a manhole.

“I'm not an animal. I intend to use non-lethal bullets or darts,” Helenka assured reporters. “Of course, if the bike messengers then collapse in front of traffic because they were running a red light, that is on them. Those heavy bikes can be dangerous for pedestrians if ridden irresponsibly.”

The Jankovics were also comforted to know that, should the poors rise up in vengeance against the hyper-rich, the base of Vice Tower transforms into a moat complete with a drawbridge and alligators.