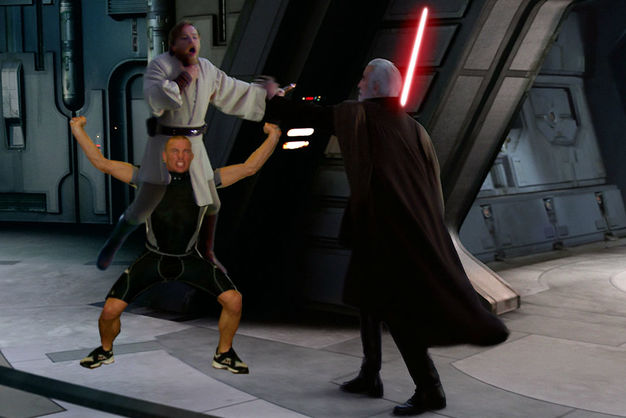 May 4, 2015 – A long time ago, in a galaxy far, far away, last February, an investigation into “the Force” began due to the aggravation felt by Imperial leadership towards what they consider to be false religious trickery. The final report released Monday concluded that all telekinetic properties of the mysterious Force were actually enacted by a group of rabble-rousing teenagers hired by various Sith lords.

“We'd had our suspicions that the absurd mystical hokum of Vader and his ilk was less than it seemed,” said Grand Moff O'Shaughnessy of Imperial internal affairs. “With a little digging, it became clear that this so-called 'Force' is nothing more than rapscallions from the slums of Nar Shaddaa pushing, lifting, and choking whoever the Sith tell them to, for a handful of credits.”

The investigation, reaching as far back as to posthumously discredit high-ranking officials such as Count Dooku, found that these impressionable youngsters were most commonly asked to push a Rebel opponent in the chest while another teen knelt behind to trip him. Occasionally, however, they'd be asked to pull off complex maneuvers like the lift-and-choke combo, which involves propping the Rebel scum up on one's shoulders while a second teen on another teen's shoulders grabs him by the neck.

“People can bash the Force all they want, but there's clearly something going on when big V makes the signal,” one Twi'lek teen told reporters on condition of anonymity. “Whether it's mind manipulation or some kind of stealth casting, nobody had a clue until this lame investigation started. And I've been doing this with my podracer buddies since Order 66 came down!

“Speaking of,” she continued, “you better believe some of the Jedi were in on this scheme as well. I could give you their names, but I doubt they're still alive. At the end of the day, the Sith had a lot more cash to throw around.”

Emperor Palpatine declined to comment on the investigation until his royal guard has had a chance to verify the findings. In the meantime, fleet and Stormtrooper army leadership all say they look forward to a more rational approach to crushing the Rebel menace.

“Tarkin and I have been looking forward to settling this matter for years, so I imagine we'll be celebrating tonight at a cantina,” O'Shaughnessy said following the formal press conference. “Maybe we'll even get a few rounds of Pazaak in before-- *cough* AACK! You damn kids!”