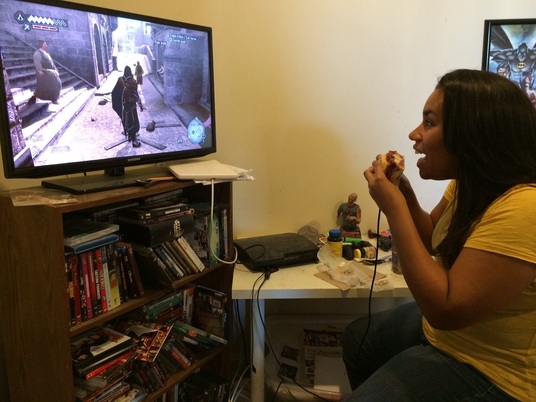 Photo by Mikael Page
July 23, 2014 - The modern American is accustomed to the luxury of dining while watching television, listening to music, or going out to the movies. But tragically, one has always been forced to decide between enjoying a nice meal or engaging in virtual recreation. Now, thanks to Sony's new Culinary ControllerTM, that choice will never again weigh on the minds of gamers, as it provides your sandwich of choice with full video game functionality.

The controller incorporates cutting-edge carbogramming technology that allows you to plug the cord directly into the sandwich's meat (or tofu for casual gamers), which then uploads commands to the Playstation based on the gamer's gripping, bite sizes, and dipping choices.

“We wanted to create a product that would fit the largely inactive lifestyle of the American gamer, and this controller basically designed itself,” said Sony America CEO Shawn Layden in an interview. “With this device, our customers will be able to play and consume at the advanced rate they've always desired.”

The Culinary ControllerTM comes packaged with various add-ons, such as dipping sauces for enhanced play, and a sandwich-mounted scope for first-person shooters. For the sake of multiplayer, pre-order customers also get a coupon for a 6-foot party sub from Blimpie.

While Sony is projecting the sale of 7 million units in the first week, beta testers are quick to warn consumers that some kinks may still need to be worked out.

“I was impressed by the controller's functionality and deliciousness,” said game tester Randy Hodgekin. “Still, improvements can be made. The aim mechanic was a little off, plus my pastrami wasn't very lean.

“Sometimes it's all in how you use a product, though. Next time, I think I might try sourdough bread, see if that makes for a more immersive experience.”

“Because this is the first product of its kind, we'll be expecting some complaints,” said Layden. “Just rest assured that we will be hard at work fixing and expanding on the product. Soon we may even have a wireless version on the market, that is, once we can ensure there's no way to accidentally swallow the transceiver.”

Layden also hinted at a rumble feature in future models of the Culinary ControllerTM, which causes the gamer's tummy to rumble when it's time to get a new sandwich.