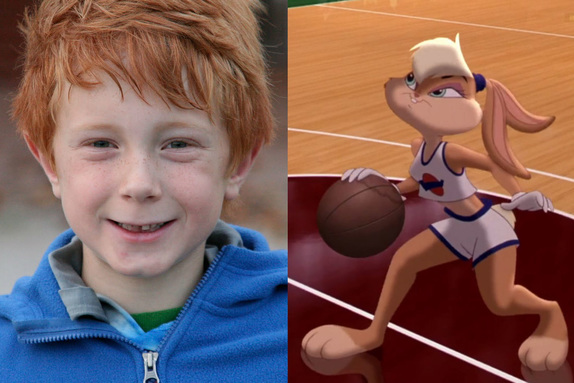 October 30, 2015 – Despite a solid, never besmirched record of progressivism and acceptance, Sacramento father Marcus Leforge admitted Thursday that he cannot wrap his head around his 11-year-old son's desire to go trick-or-treating this weekend dressed as Lola Bunny, the anthropomorphic female rabbit from the animated film Space Jam.

“I would totally get behind the princess from Frozen, or even a My Little Pony character, but Lola Bunny just makes no sense. I mean, how did he even find out that character exists?” Leforge said of his son Tag, who was allowed to name himself at age 6. “I don't think he's even seen Space Jam!”

When asked if perhaps Tag had become acquainted with the rarely-used Looney Tunes female lead in the recent Looney Tunes Show, or even in reruns of Baby Looney Tunes, Leforge assured reporters that his children are discouraged from watching animated shows on TV, as they tend to foster a penchant for careless violence.

“Tag's TV diet consists mainly of educational programming on PBS, as well as some of his favorites like Modern Family and The Good Wife,” Leforge explained. “I've never once seen him switch the channel over to Cartoon Network, nor does he show any interest whatsoever in basketball, even of the absurd cartoon variety.

“I mean, maybe he was browsing the web, as he is allowed to do freely, and came across some news about the possible LeBron James sequel that piqued his curiosity. But I thought I heard they'd pretty much scrapped that idea. And let's be honest, no one whose mind isn't polluted by 90s nostalgia would possibly care to see or even learn about that.”

Despite his total confusion, Leforge wishes to be supportive of his son's costume choice. However, he said he intends to try and convince Tag to pick something less weird, like one of the Gems from Steven Universe or Selina Meyer from Veep, with the few days he has left.

“It's not that I'm afraid of the other kids making fun of him,” Leforge sought to clarify. “I just don't want the other progressive dads at the houses we go to thinking I'm raising a pop-culture-obsessed little weirdo who enjoys objectively terrible films from before he was even born. Honestly, if I don't put my foot down here, then what kind of father will I be?”

As of Friday, Tag has used his personal sewing kit to make a pair of short shorts complete with a bushy cotton tail, while Mr. Leforge has taken to drinking scotch in the corner of the den.