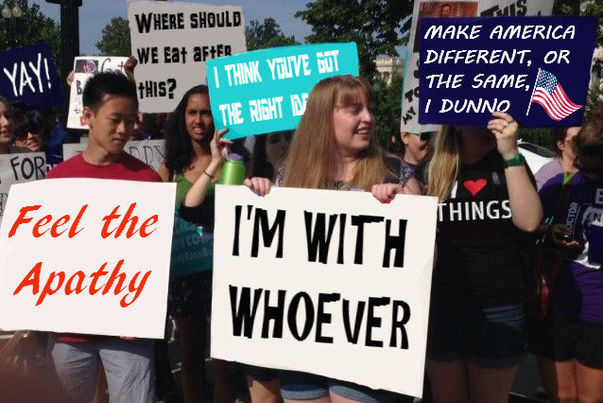 Photo courtesy of MTV News
April 19, 2016 – With the New York State primary signaling the last remaining weeks of the U.S. primary election season, America's registered independents have descended upon the National Mall to celebrate the anticipated victory of whoever and whatever it is that their peers have settled upon, and to look forward to a similarly indecisive general election.

The rally, which organizers titled “The Great Sit-Out,” was replete with homemade signs supporting the upcoming decision made by the rest of the party-affiliated population, and stretched from the Lincoln Memorial all the way down the reflecting pool to the WWII Memorial, turning out primary non-voters in the hundreds of thousands to support non-participation and revel in their mutual indifference.

“It's just great to see so many other people who, like you, could give a shit which candidate each party wants to throw their collective weight behind,” said one rally-goer, Martina Ginger. “With all the months of arguing and smearing and political posturing on social and mainstream media, it's easy to forget that a lot of Americans just spend primary day wondering what to have for lunch, and whether or not to give the next season of The Walking Dead a chance.”

Various speakers on the steps of the Lincoln Memorial, including Jesse Ventura and that guy Sean from work who shares all those memes about both parties' corruption, stirred the crowd with rousing rhetoric about being fine with whatever direction voters want to take our country in. By the end of the rally, everyone present seemed excited about the future in which their voice held no part.

“It's days like today that remind me why I love being an independent voter,” said another attendee, Rodney Liu. “This rally, and the fact that I get to be ostracized by both my parents and my millennial peers for not sharing their enthusiasm for one candidate and scorn for another.”

About half of all rally-goers in attendance assured organizers that they'd be back for the next event in October, “America Undecides,” to celebrate the undecided voter's unique role in completely disregarding the basis of a functioning democracy.