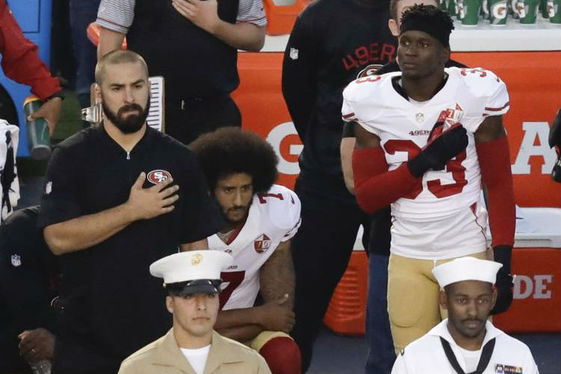 September 5, 2016 – Proving definitively that there is no ideological divide between police and the minority communities they are tasked to serve, the United States has opted to lose its collective shit over San Francisco 49ers quarterback Colin Kaepernick silently sitting down during the National Anthem.

“I think our outspoken, rageful reaction to Kap's silent protest really proves our point that he has nothing to be mad about,” said supposedly “former” 49ers fan Jethro Tuttlenick. “Surely if there was evidence of police misconduct or bias towards African-Americans in this country, I wouldn't feel the need to deflect that criticism by telling the owners to cut that disrespectin' sonofabitch in an open letter on the official 49ers Facebook page.”

Seeing the challenge posed by the quarterback's critique for what it really was, thousands of patriotic Americans took up the task of restoring racial harmony by questioning Kaepernick's ethnicity, threatening him with violence, and citing his paycheck as a reason to shut up about his personal opinions. But America's colorblind utopia wasn't truly repaired until online critics pointed out that people who choose to talk about race are the real racists.

Furthermore, in an effort to affectionately quash the athlete's misguided gripe by refusing to address it in any meaningful way, several fans have provided open support for the police, the true victims of police violence.

“Thank you all for your support against this vicious, non-violent attack that undermines the perfectly acceptable status quo,” Police Officers Association president Martin Halloran said at a press conference. “But this isn't just about our officers, whom our union views as heroic but thin-skinned warriors whose actions are above reproach. It's really about the troops... somehow.

“Suffice it to say, our police workers might intend to boycott future 49ers games. And that statement should in no way be interpreted as a symbolic middle finger to the pursuit of common goals, or as a feckless fuck you that has no bearing on the stadium's continued employment of private security but only serves to exacerbate a situation which might have otherwise gone ignored. Cuz it's, you know, about the troops.”

As of now, having restored the racial harmony that has always been a foundation of our public discourse, the nation, and its proudly nationalistic sports fans, stand poised to go absolutely apeshit bonkers over the next opinion an athlete shares.