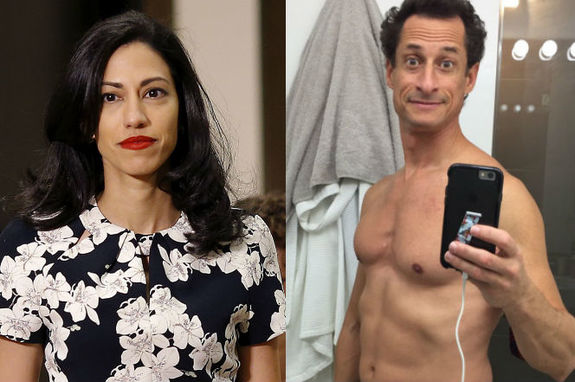 November 2, 2016 – In the wake of the FBI's announcement that new evidence in Hillary Clinton's email scandal has been seized from disgraced congressman Anthony Weiner's laptop by way of her top aide Huma Abedin, proponents and voters from both sides of the aisle are growing excited at this new opportunity to criticize and tear down yet another woman who was betrayed by her husband's penis.

“It's like Christmas morning for those who enjoy blaming women for the sexual faults of their spouses,” said Trump supporter Candace Hickups. “And it couldn't come soon enough. People around here were getting tired of constantly blaming Hillary for Bill's indiscretions. It was starting to sound, I dunno, mean. But this time is different! We can just point the finger and laugh as she takes the heat for something which never would have surfaced if the man she trusted had kept his dick in his pants.”

Conservative Clinton critics, who had also started feeling bad for picking on Abedin's ethnicity and background, seized on the opportunity to call her and her boss corrupt for doing something with emails which, pertaining to Anthony Weiner or not, must surely be pretty bad. Liberal critics, meanwhile, seem split on whether to throw another jilted woman under the bus and move on, or whether the fault should reside with both women.

“I must say that I feel personally betrayed by Huma,” said shut-in Minnesota voter Ralph Lawrence. She should have been keeping better tabs on her husband's online correspondence! How was that not the first thing on her mind throughout this tumultuous campaign, during which it came to light that the man she married may have sexted with an underage girl?

“I think she should step down as campaign vice chairwoman. Immediately, before any details about these emails which likely have nothing to do with her are uncovered, or before it's proven that no one's at fault and this whole scandal is nothing more than a political stunt. That would put my mind at ease.”

Ms. Abedin fielded questions from reporters this morning, including whether or not she felt bad that her actions caused the stock market to dip.