Mysterious Masked Vigilante Appears on the Front Lines against ISIS 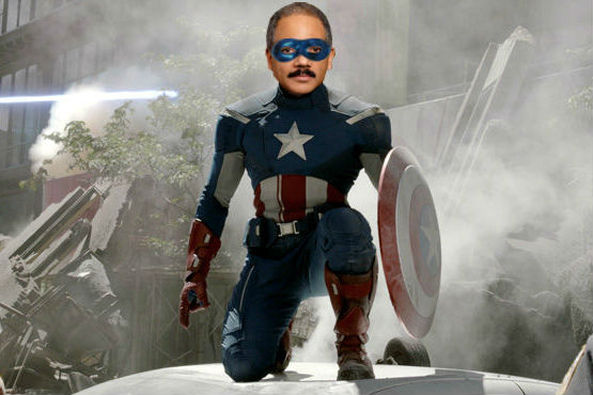 September 26, 2014 – Recent political turns in the United States, including an Obama cabinet shake-up on Thursday, have tested confidence in America's projection of power and stability, and undermined the fresh war effort against ISIS terrorists in Syria. When all seemed lost, rather suddenly on Friday morning, an unidentified masked stranger, adorned in patriotic garb and brandishing a stars-and-stripes vibranium shield, appeared on the battlefield and took command of allied forces, with the confidence of a man experienced in both leadership and law enforcement.

“You kids take those punks in the streets, I'll take the rooftops,” the mystery man bellowed to assembled troops outside of Raqqa, in a voice both dry and authoritative. “Before you know it, we'll be able to try these villains in a civilian court stateside.” He then impossibly leapt atop the nearest building with a twitch of his silly mustache.

In the hours following the arrival of the unnamed vigilante, the tides turned significantly. While ISIS maintains control of Raqqa, they have been pushed into bunkers deep in the city, while the American champion sets up a legal framework for prosecuting criminals for anything from vandalism to beheading. He also successfully shut down an ISIS cosmic weapons lab where they had nearly completed production on a cube device with reality-altering powers.

“It was a simple matter of monitoring ISIS's private communications,” the utterly inscrutable hero reportedly bragged to one attractive female agent. “I mean, once this war is over we'll be sure to safeguard people's privacy rights, but for now we kind of need the intel.”

When asked by the agent where he came from and what his intentions were, the man remained closed off and cagey, saying only that he has “much to atone for.” When pressed harder, this was his declaration:

“I made a promise to someone. Another man who believes in America, but is often at a loss for how to save it. I told him that even though I had to go, that I would always uphold the ideals of our great nation, that I would always fight for freedom against tyranny, in all its forms. And also that I hope to remain directly involved in his administration, and for the love of God, don't listen to anything Joe says.”

While he remains camped at an undisclosed location separate from allied troops, the mustachioed mystery man says he plans to contribute to program planning during the day as well as enemy engagement. One plan he conveyed to army leadership was that they should sell guns to ISIS forces, but track the movement of the weapons back to major enemy hiding places.

“But, and this is really important,” he cautioned, wide-eyed. “Do NOT lose track of the guns. For real. I'm super serious about that part.”