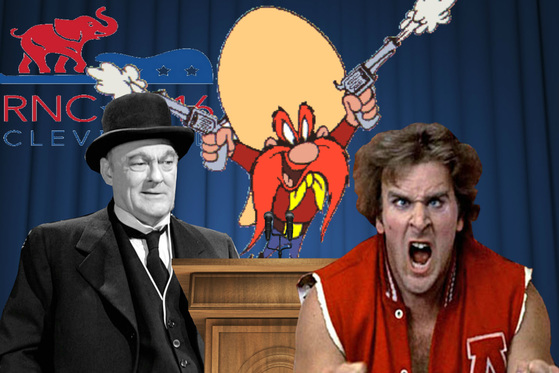 July 19, 2016 – Following a show-stopping rally cry by Rudy Giuliani, and a unique and creative speech about morals by Melania Trump as part of Monday's theme of “Make America Safe Again,” the Republican National Convention is picking up Tuesday where it left off.

Here is the full list of remaining speakers and events through Thursday:

- Reince Preibus commences the day with a fun game of anagrams

Chris Christie
The governor of New Jersey smiles, congratulates Mike Pence, does not burst into tears or else

A Hispanic Person
To be determined

Henry F. Potter
The renowned businessman and keynote speaker espouses the danger of handouts to losers like George Bailey, assures crowd he sides with them in the War on Christmas

- Speaker Paul Ryan thanks everyone for coming, sighs, reiterates his support for Trump and tells attendees not to talk to the press on their way out

Grizzled Pete
The mysterious drifter and convention attendee rails against “immigants” and “he-shes” and “parasites,” both the government moochers and the ones residing in his unkempt beard

- Hulk Hogan and Lou Ferrigno wrestle, allowing the audience to maintain their grip on reality

Yosemite Sam
The celebrated Texas lawman reiterates most of what Arpaio said, but with more “yee-haws” and reckless pistol shots into the ceiling

- Stephen Baldwin enters from backstage, gets confused for an Alec Baldwin that got shrunk in the wash, booed offstage

A Gay Person
To be determined

Mike Pence
The Indiana Governor and Trump's VP pick touts the need for a small government that doesn't involve itself in citizens' affairs, except in the case of preventing rape victims from receiving abortions and stationing armed guards at restrooms to redirect people on where to take a dump

- Reince Preibus steps out, shrugs, says “I guess this is the end”

Ogre J. Trump
The renowned college athlete and nephew of the Donald recites eloquent, long-winded treatise on the “NERDS!” in the Democratic party

Smeagol “Gollum” Wittington
The cartoonish personification of crippling greed espouses the virtues of Ayn Rand's objectivist philosophy, asks if anyone happened to have found “The Precious” in the men's bathroom

A Black Person
To be determined

- Trump's children and grandchildren are trotted out to symbolize how America can, like a family, unify around the common ideal of wanting to be treated like medieval royalty without earning it

Donald J. Trump
The presidential nominee and man of the hour gives a speech that American history will come to know as the “We Had a Good Run Address”

- Paul Ryan steps out, hangs a noose around his neck, waves everyone out of the convention center without saying a word