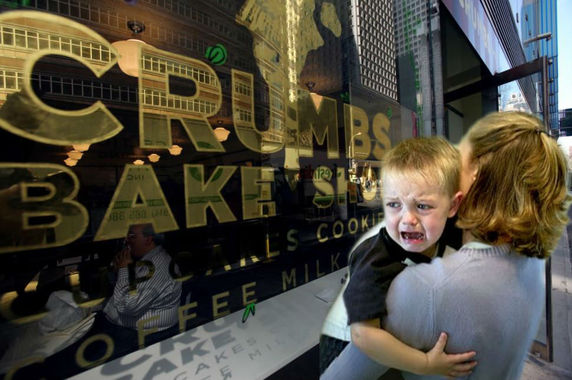 July 10, 2014 - Late Thursday afternoon, Maribel Robbins arrived at the Crumbs Bake Shop in Union Square with her son Bryce, age 7, only to discover that the shop was closed, along with all 48 other Crumbs locations nationwide. With her boy on the verge of a veritable deluge of tears, Robbins sought to soothe the upset child by calmly explaining the harsh realities of the stock market, and the plentiful hazards of public trading.

“You see, the company expanded too rapidly, when in truth the gourmet cupcake business was not particularly scale-able, sweetheart,” Robbins said gently to her now quite visibly distraught toddler. “They were probably under a lot of pressure to shift mass amounts of product after being sold to a shell corporation, when in reality, demand for such a niche product had peaked in 2009 and was slowly falling off.

“Their cupcakes might have tasted good, sure. But when company-wide profits consistently fall below Wall Street projections, that's all that matters, baby.”

Bryce, who had been promised a cupcake for finishing all his homework early in the week, and who was now throwing what can only be described as an epic tantrum, seemed unconsoled by knowledge that Crumbs' plans to expand into the suburban mall arena were widely considered unfeasible when decreases in sales in the metro market indicated a business bubble on the verge of bursting.

“Certain crazes and trends are fueled by pop culture media, but massive profit spikes are rarely an indicator of a sustainable business model,” Robbins explained to her adolescent son, now writhing on the sidewalk in feigned agony. “Knowledge like that is far sweeter than any pastry, even the ones with frosting in the hollowed-out center.”

Robbins was last seen calmly dragging her son back towards the N train, resolved to buy something kind of sweet for Bryce at the corner store before his afternoon nap, and then to take out her frustrations at not getting her favorite Red Velvet Cheesecake on her unsuspecting husband.