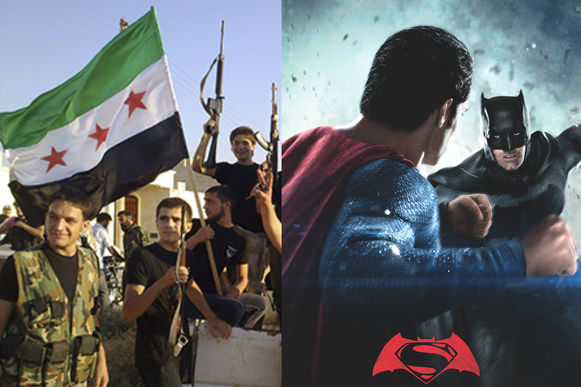 Photo courtesy of Reuters
April 5, 2016 – As the Syrian civil war continues to ravage the nation, and fighting spills into factioned-off neighborhoods in the city of Aleppo, it has become clear to outside observers and reporters on the ground that the opposition, the Syrian National Coalition, remains tragically, pitifully without a clear stance on the relative awesomeness or shittiness of Batman v Superman: Dawn of Justice.

“On the front lines, all the talk amongst rebels seems to be about how to secure the highway leading from Aleppo to Damascus, and not about the divisive nature of the recent DC comics-inspired box office blockbuster,” reported CNN Middle East correspondent Arwa Damon. “This may be more evidence that, while Assad has yet to release an official statement about the film himself, his opposition does not entirely share America's values.”

The debate over Zack Snyder's $250 million lead-up to the Justice League film, which has divided both fans and moviegoers with no clear demarcation, seems almost entirely lost on the young revolutionaries and possible al-Qaeda sympathizers of the Free Syrian Army. Most admit that they haven't even seen the film.

“I find myself more invested in the outcome of this war than in the fate and ongoing quality of Warner Brothers' superhero film slate,” said freedom fighter Nizar Almasi, who had recently sat through the 2 1/2-hour film in his downtime. “That being said, I was surprisingly invested in this unique iteration of the classic characters, who seem to be more a reflection of our reality than perfect do-no-wrong superbeings, which I find more compelling. Plus Affleck was sick as Batman, especially when he pulled that tire all muscly-like.”

“I've actually been a fan of both characters since childhood,” fellow rebel Ahmed Quraishi chimed in. “And I have had a lot to say about how even though I understand that DC wants to serve as a counterpoint to Marvel's more “fun” style, the protagonists' motivations in the film were not fully justified, which in turn fomented an overarching sense of nihilism where you have two anti-heroes with no clear goals apart from defeating one another.

“Unfortunately, I haven't really had time to blog about it, what with all the fighting and death and stuff.”

When asked if they had any thoughts on the conflict or possible outcomes in Marvel's upcoming Captain America: Civil War, most of the soldiers pathetically shrugged their shoulders before ducking behind a bombed-out van to avoid sniper fire.