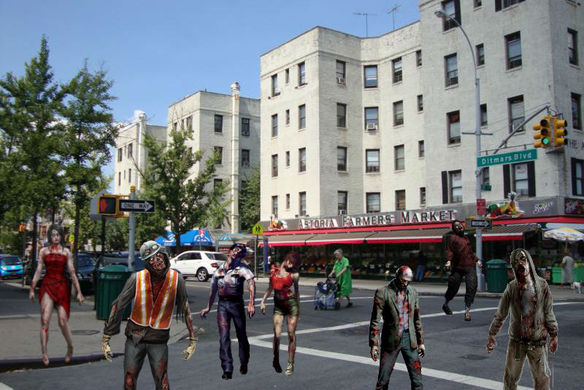 October 8, 2014 – A minor outbreak of a virus which reanimated the dead to roam the Earth seeking human flesh for consumption, an event that took place in Queens, New York from October 4th to the 8th and resulted in over 200,000 casualties, went largely unnoticed by the residents of Manhattan or Brooklyn, who rarely travel there for any reason.

“A bunch of us were out to lunch between shifts and our friend Kevin was like, 'Oh yeah, did you guys hear about the zombies in Queens?' None of us knew what he was talking about,” said Marcus Goldstein of Greenwich Village. “You just don't normally hear about stuff going on in that part of the city. It's like when they host the US Open, or that time Jay-Z passed through on his way to the Barclays Center. It just sort of happens.”

Queens, a New York City borough housing 2 million people, and home to the famous New York Hall of Science and Aqueduct Racetrack, had to weather an undead outbreak which seemingly began at Flushing Cemetery on Saturday before traveling all the way to Astoria and Long Island City. By the time the military stepped in to combat the scourge and blockade the roads, the situation was largely contained, and only now is information reaching anyone in the outer boroughs who doesn't immediately lose interest at the mention of Queens.

“I have a friend who lives in Steinway, so of course I hope she's okay,” said Rebecca Overton of Williamsburg. “To be honest though, I kind of lost touch with her way before this. It's just a pain in the ass to go over there, and there's nothing to do.

“Seriously, you could tell me that this is the kind of thing that happens in Queens all the time, and I wouldn't be the least bit surprised,” she added. “And really, even if it was a roving scourge of hot guys, I'd probably rather hang out on the Lower East Side on the weekends, thank you.”

When asked if they feared for the fate of their brains should any zombies manage to breach the perimeter, most respondents dismissed the scenario as unlikely, as the transportation is too annoying on late nights even for the undead.