Mike Huckabee Clarifies Statement: “You Don't Understand, I Was Referencing the Holocaust for Political Gain” 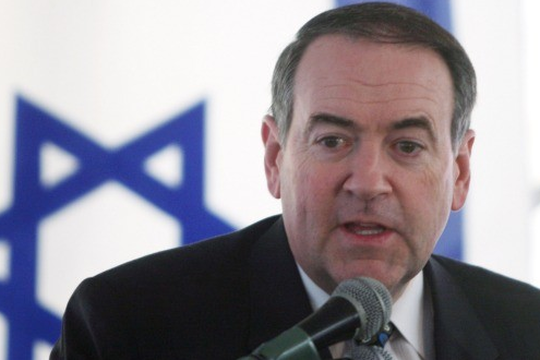 Photo courtesy of JTA/Getty Images
July 29, 2015 – Last weekend, long-time presidential candidate Mike Huckabee stated in an interview that, by trusting the Iranians with the new nuclear deal, President Obama “will take the Israelis and march them to the door of the oven.” Mainstream and social media flew into a frenzy, until Monday, when Huckabee appeared before the press to clear up any misunderstanding of his words.

“It's obvious my opponents have intentionally obfuscated my meaning, and the media has taken the bait,” Huckabee told reporters. “But I'm here now to clear up any possible misconceptions. What I was actually doing when I made that statement was conjuring an image of the moderate left as Nazi followers, and equating this measured act of diplomacy to the worst orchestrated enactment of mass murder in recorded history, the Holocaust.

“In doing so, I hoped to appear more viable to the country at large as a strong leader, who is willing to stir the pot of ethnic and religious tensions purely for personal gain. So try reporting that instead of whatever fits your preposterous preconceived narrative.”

The Democratic party, as well as representatives of the state of Israel, have already jumped on the comments made by the TV personality/candidate, saying that they are harmful to the national discourse both in terms of the Iran deal and the upcoming election. But Huckabee disagrees.

“The far left would have you believe that I was attempting to make a nuanced statement about foreign policy, and the inherent dangers of trust without verification. They would actually try to make you think I had something to offer future debates beyond reckless fear-mongering and false folksy phrases. But that is a textbook case of political spin.

“The truth is, I chose to compare our democratically elected leader to Adolf Hitler by lazily invoking one of the darkest chapters in human history, all in order to stir up my conservative voter base, a surprisingly large and aggressive group of Christians who hold the Jewish state in inexplicably high regard. It's sad how the liberal media tends to twist these things.

“I hope that clears everything up,” he concluded. “Rest assured, so long as my primary opponents like Ted Cruz and Donald Trump are carefully measuring their public statements, I'll be there to take a shit on rational dialogue.”

Huckabee then shifted gears with the assembled reporters by looking ahead to budget discussions in the fall, and how he intends to compare any attempts to raise taxes on the super-wealthy to the Spanish Inquisition.