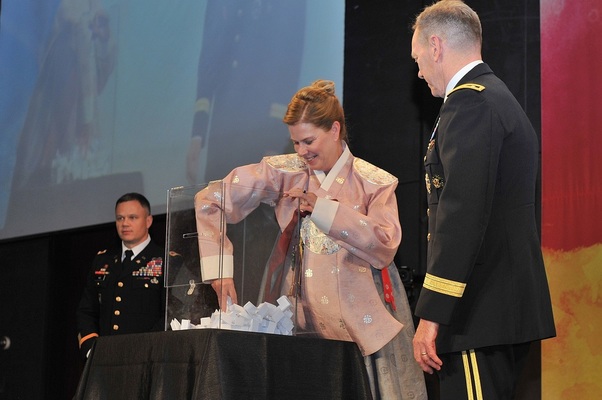 Image courtesy of U.S. Army Sgt. Lee
May 26, 2015 – Memorial Day, a solemn American holiday honoring fallen veterans usually celebrated with barbecues and general drunkenness, was brought to a close in the White House screening room yesterday with the 61st Annual Unnecessary War Raffle, a drawing that determines which lucky country will be the target of our nation's next wholly avoidable military quagmire.

“We feel it's the best way to honor our fighting men and women, both those who made it back and those who didn't,” said General Frank J. Grass, Chief of the National Guard Bureau. “It's a chance to prolong service and to continue the work of past military leadership, in a way that is both unbiased and rather exciting.”

The winning country was drawn by Lt. Gen. Bernard S. Champoux and his wife, Mary Sue. The country submissions, of course, were made by lobbyists of various industries with vested interests in extended military conflicts, particularly with nations rich in materials useful to their enterprise.

The winning nation, to everyone's surprise, ended up being Paraguay, which drew enthusiastic whoops from Big Soybean, and audible grumbling from all others gathered.

“A lot of folks were really banking on Iran, or at least Venezuela,” Grass told reporters after the drawing. “But there's always next year, and in the meantime, there's plenty more burgers and beers with which to honor our troops.”

Soldiers in attendance say they enjoyed themselves, but that they particularly look forward to Veterans Day, when the Department of Veterans' Affairs will randomly draw one health benefits claim to be processed.