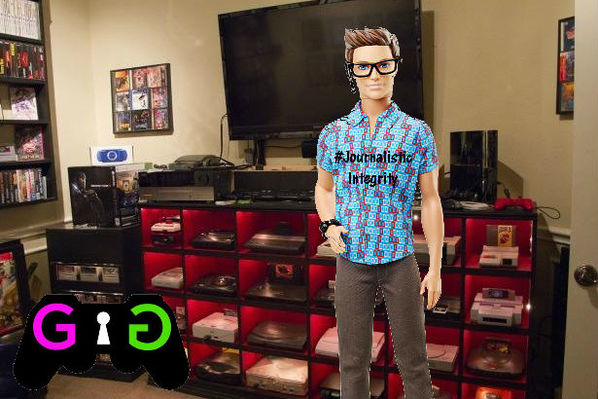 Photo courtesy of Eric Pangburn, dudeliving.com
June 17, 2016 – Riding the positive feedback from social media for their newly released “Game Developer Barbie,” Mattel has fast-tracked the release of another doll that has been in the works for over a year: Gamergate Ken, complete with nerd glasses, #JournalisticIntegrity shirt, a hacked gaming laptop, and over twenty abusive online profiles.

“Our goal at Mattel has never been to pander, but to always reflect both the real lives and the highest aspirations of young women and men,” explained Mattel President Richard Dickson. “With Game Developer Barbie, we sought to show young girls that they can be just as creative and capable as the mass media drones we see working today. And with Gamergate Ken, we wanted to show young boys that they too can harass and threaten those same developers while kicking back with their consoles and contributing nothing to society.”

While Dickson acknowledged that Mattel may not have many fans in the Gamergate community currently, he expects that some will come around when they see how Ken can be made a companion while spewing their unique online hate. The doll comes complete with an insult vocabulary attachment, which also serves as an in-the-moment thesaurus for when chatroom vitriol becomes too stale.

Also, the doll has an enormous penis.

“Our company has made great strides in showing learning-age girls that when they grow up, they can do anything,” Dickson said. “We figured it was high time we reached out to the subterranean monster-manboys who are sick of hearing about female empowerment, and aren't afraid to say so via a series of increasingly despicable tweets.

“So step right up, MRAs, for the new Gamergate Ken doll, and then let's dox some feminazis!”

Gamergate Ken can be accessorized with a gaming headset, a console gaming dream garage owned by Ken's parents, and a picture of Anita Sarkeesian that can be photoshopped however you want, each sold separately.