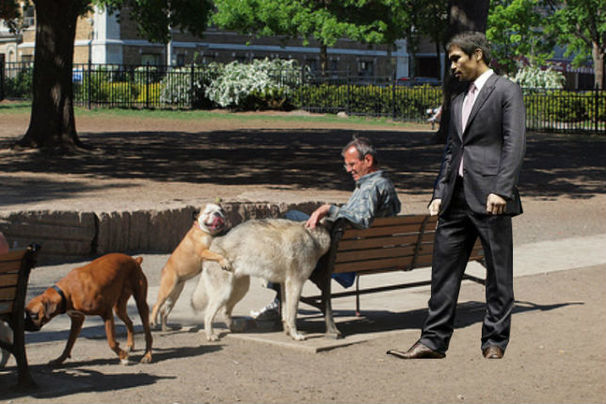 Photos courtesy of torontothenotsogood and The Associated Press
February 19, 2016 - Professional boxer and Philippines congressman Manny Pacquiao, who on Monday stated in an interview that homosexuals are worse than animals, doubled down on his sentiment this morning, insisting that all non-human creatures are capable of distinguishing between male and female for the purposes of sexual activity, as he headed towards the first public dog park he'd ever been to in his life.

“I may be an athlete and politician by trade, but I also fancy myself an expert student of zoology and animal behavior,” Pacquiao told reporters assembled outside his home in GenSan. “I have certainly never seen any gay sex in the many hours I've spent at zoos and browsing YouTube videos about good Christian monkeys. And believe me, I've looked.”

Pacquiao recently purchased a three-year-old English Bulldog named Romeo for himself and his five children, and was just on his way to the dog park with him, where Romeo would presumably run and frolic and butt heads with the other male dogs, but he wanted to first clarify the statement that had lost him his Nike sponsorship.

“I did not mean to say that people who engage in sex with the same gender are worse than animals, even though those are the exact words that came out of my mouth,” he said. “I just felt it was important to speak the truth, not just from a religious but also a biological standpoint: that dogs, cats and penguins have the uncanny ability to sense another animal's gender from afar, and therefore steer clear of any deviant activity. Now if you'll excuse me, Romeo seems to be thrusting in the general direction of the park.”

Reporters remained parked outside the famous Filipino's home, awaiting his return from an animal-themed enclosure arguably designed for the express purpose of canine sexual experimentation. Upon returning from play with his un-neutered pooch a few hours later, Pacquiao appeared sullen and unwilling to speak to the press.

“I'd rather not talk about it,” Pacquiao said when asked about his first experience seeing his dog mingle freely with other pets. “If you'll excuse me, I need to go inside and make some adjustments to my Senate campaign literature.”

Witnesses interviewed after the fact say that a veritable bacchanal of fur and flesh may have taken place between upwards of seven pets simultaneously, a spectacle of canine deviance so passionate that the dogs' various owners were physically unable to pull their pooches apart before the deed was done.

Pacquiao's national approval rating has wavered a bit in the wake of his comments about homosexuals, prompting boxing rival Floyd Mayweather to announce he'd be entering the Philippines Senate race on a platform of respect towards women.