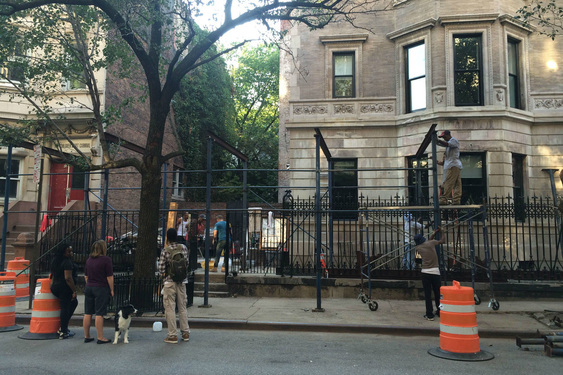 Photo by Mikael Page
August 20, 2015 – For years, at least two, the scaffolding surrounding a beautiful brownstone building in upper Manhattan stood as a symbol of tyranny and dragged-out contract construction. But last Monday, onlookers cheered and breathed a sigh of relief as triumphant construction workers tore down the oppressive eyesore, an action which rocked the inter-tri-state community.

“Our long neighborhood nightmare is finally over,” indigenous resident Martha Beetwich told reporters. “No longer will we have to turn a corner on the way home from work and see those hideous platforms eclipsing such a nice building that looks like all the other buildings next to it. At long last, we get to see the pretty but inexpensive and likely shoddy workmanship that will look brand new and won't fall apart for at least a couple months.”

While construction continues in other parts of the neighborhood, not to mention the many potholes and broken fences that go completely unaddressed, most Harlem inhabitants are savoring the small local victory.

“I know that the scaffolding removal is largely symbolic, and it could just as easily go back up in a week or so without warning, but you have to appreciate the little things,” said Gary Pounder, who also lives in a completely different building nearby. “I'm just happy to see this monstrosity finally toppled, though I'll probably miss it when it rains.”

When asked what this structural milestone meant to them, property owners unanimously agreed: an opportunity to raise rents for the entire block.