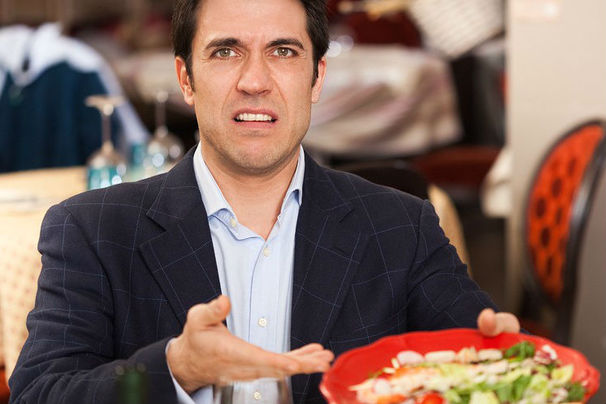 November 11, 2014 – Whining that the décor is really ugly and that there's way too much salt in everything, Des Moines resident Burt Falwell, 38, who abstained from selecting the dinner venue for himself and his four friends, simply will not stop complaining about the food at the local Olive Garden.

“I've never liked Italian food, and I know my friends know this,” said the man who, when asked to cast the tie-breaking vote on the group's evening activity, simply stared at his phone and muttered something akin to 'I'unno'. “I mean, look at this pasta and these breadsticks. Are they endless? Sure. Does that spell disaster for my carbs intake? You bet your ass! This was a ridiculous choice.”

The group of five friends, who all met in college, rarely have a chance to dine together due to all working in different Iowa cities. The last time they joined up was 2014, when, according to ex-girlfriend Margaret Hill, Falwell also waived his right to decide the venue.

“We ate at Proof Restaurant that year, and Burt was fine with it,” Hill told reporters. “Even so, we all told him that he should participate in the selection, cuz he may not always like what the rest of us decide. He just shrugged and said it didn't matter to him, which, I think this year proves, is utter bullshit.”

The group confirms that Falwell was quietly accepting of their choice, which came down to a coin flip, until they were seated and he got a look at the menu, which everyone else had been inspecting back at Rick's house on their phones. When he exclaimed that there was nothing to eat that he liked, the group threw up their arms in resignation.

“I'm not crazy about the Garden either, and I had really wanted to eat at Dave & Buster's,” explained dejected friend Cynthia Temple. “Sure, you gotta pay a little more to make it worthwhile, but think of all the fun games we could have played if we stuck it out! I know Burt was excited about Buster's too, I've heard him talk about it before. But he decided not to contribute, and now we all gotta eat shit salad.”

When it was announced at the tail end of the disappointing meal that Rick would be moving to Miami in a couple months, the group began planning a last hurrah get-together, to which Falwell responded that he would happily drive to meet them wherever they chose.