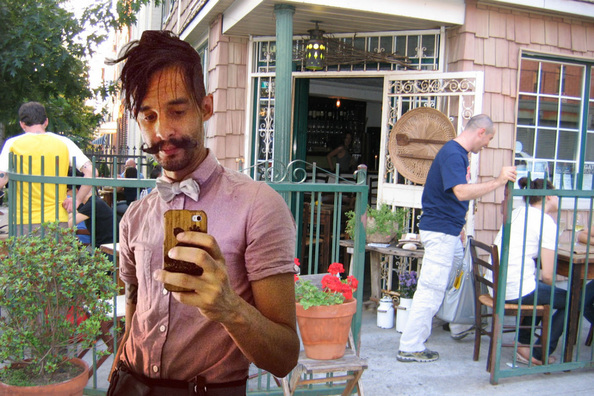 Photo courtesy of Hassan Abdel-Rahman and D.O.C. Wine Bar
October 29, 2014 – Deciding it would make a good experiment for his Tumblr blog, local hipster Duke Holden walked the streets of Williamsburg, Brooklyn for eight hours while sporting a hidden camera, to see how the people he crossed paths with would acknowledge him. What the video proves, much to the detriment of society, is that there is a disturbing lack of regard for the effort this young adult man put into his hip appearance, particularly his properly waxed handlebar mustache.

“It's commonly debated nowadays whether passers-by show an inappropriate disinterest towards men in bow ties and short-sleeved pink dress shirts,” Holden wrote in his blog. “This video is meant to prove once and for all that stylish men who put significant ironic effort into their appearance receive far less than the attention they clearly crave.”

As he walked to each of these places, strangers on the sidewalk conspicuously focused on their iPhones or the space in front of them, never so much as leering at Duke's slim frame or complimenting his even slimmer jeans and the way they make his ass look.

“I thought for sure I would at least get a hoot or a whistle, especially from those construction gals on Roebling,” Holden wrote. “Instead, most women actually turned their heads, even when I made direct eye contact and started breathing heavily. It was extremely disheartening.”

Early responses to the video are largely positive, with many Williamsburg and Portland residents expressing solidarity with Holden. However, some commenters have suggested that if he doesn't want to walk to work without being complimented, Holden should consider how he's dressed, and perhaps add rainbow suspenders, or those rings that stretch out your earlobe.

“I find those suggestions highly offensive, as if I'm supposed to conform to another person's standard of male beauty in my everyday life,” Holden told reporters. “I already have my own standard, and I work really hard at it. It's the rest of these tight-jawed non-gawkers who need to get with the program, and ogle me already.”

Holden signed off his blog post by saying he hopes to one day live in a world where men who wax their facial hair and knit their own sun hats will be able to walk down the street to the sound of raucous applause from every passing stranger. In the meantime, he says, he'll sadly have to content himself with his own quiet thoughts and reflections.