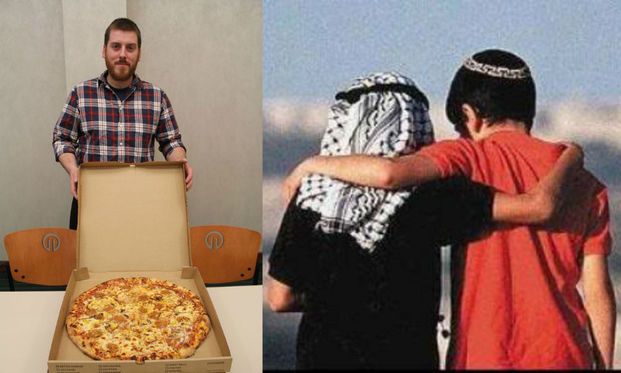 Left photo courtesy of Spak Bros. Pizza in Pittsburgh.
July 7, 2014 – While dining at a local Pizza Hut in Pittsburgh, PA with friends this afternoon, 29-year-old Jared Meisner drew comparison between the decades-old conflict between the states of Israel and Palestine and the toppings of the party's large Meat Lover's Pizza, causing a seismic shift in the region which led to a full cease in hostilities, as well as worldwide support for a two-state solution.

The Middle Eastern region, which has seen tensions boil over in the past month following a series of murders, crackdowns and fiery demonstrations, was perfectly summarized by Meisner's calculated analogy involving a baked, non-kosher entrée from one of America's most successful food chains.

“The problem begins with the fact that everything is contained within the crust, which is Israel and all surrounding territories,” Meisner deftly explained to his colleagues, adding perspective to a prolonged struggle involving both ethnic and religious quarrels. “The toppings can't see a life beyond the crust, cuz see, outside the crust, there is no pizza. That's cultural identity, bro.

“But then you look at what's on the pizza,” Meisner continued, “you see what's there: a whole lot of pepperoni and sausage, all spread out and smushed against each other. That's the Israelis and Palestinians, respectively. A lot of them think they should have their own pies, which would be fine, but we like to see the two mingle sometimes, know what I mean?

“At the end of the day, just remember that both these toppings come from the same animal. Deep, right?”

Meisner's dissertation, which reached the warring nations through social media, struck a profound chord with all involved parties both conservative and peace-seeking. In spite of the deep scars of a conflict spanning most adults' lifetimes, soldiers and protesters on the border of Gaza and in the West Bank had to admit to each other that Meisner's analysis was “pretty boss.”

“And I know what you're asking yourself,” said Meisner, concluding his treatise. “'What's with the cheese, Jared? What does the cheese mean?' The cheese is peace, brah.” All attending sat in stunned silence. “The cheese is what holds everyone together, covering the tomato sauce of anger and discontent. What we all need is extra cheese.”

Within three hours of ending his speech, Jewish and Muslim Israelis gathered in Zion Square, where Palestinian nationals will be joining them as soon as the walls surrounding the state are demolished. Presidents Netanyahu and Abbas are also expected to be in attendance, to discuss both a joint crackdown on Hamas and the rebuilding of numerous homes in the West Bank.

When asked what the bacon symbolizes, Meisner said, “Nothing, man. Bacon is just delicious.”