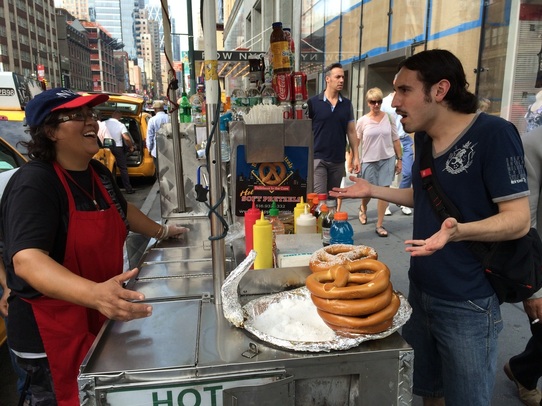 
July 4, 2014 - When Raymond Kickery, a 28-year-old produce manager from Kent County, Rhode Island, purchased a hot dog from a vendor on 44th & 8th in New York City, the traveler was shocked to learn that, despite being absolutely certain he had paid only two dollars for a hot dog in the past, this one was going to cost him three.

“Honestly, I’ve been coming to the city since I was a little boy and I’ve never paid three dollars for a hot dog,” said Kickery, who came to New York in hopes of visiting the new Time Square Sunglass Hut. “I just wanted to purchase some designer eye wear, not be taken advantage of.”

Attempting to come to grips with this financial predicament, Kickery says he can only think of the good old days. “The thing is, I was in NYC about a year ago, and I bought a hot dog a block away from here, and it was only like two dollars. It’s just a shame that New York isn’t exactly how I remember it.”

The vendor in question remains mum on the subject, but insists her hot dogs are worth the money paid: “Hot dogs three dollars, hot sausage four.”

At the end of the day, Kickery is still determined to enjoy his trip to New York and his snack. “I’m still gonna buy the hot dog. I’m hungry, that’s how they get ya,” he declared as he reached into his pocket, pulling out a crisp 20 dollar bill. “I mean, at least it comes with a free soda.”