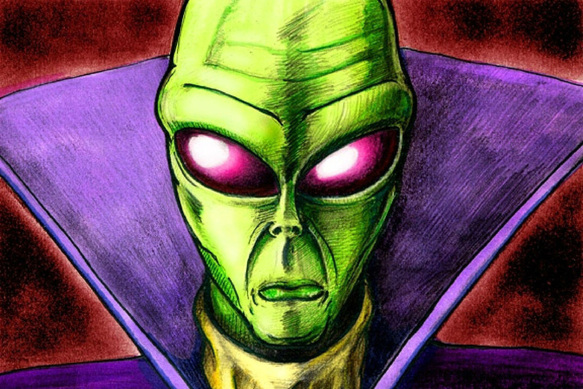 Image courtesy of L. Rick Vodicka
January 12, 2015 – Former intergalactic ruler Xenu, currently incarcerated within an unnamed mountain by an eternally powered force field, has observed humanity from his prison for thousands of years, and now admits his excitement at the idea of a handful of his thetan-ridden worshippers causing murder and destruction under the false guise of Scientology.

“Throughout your petty human existence, you have slain each other in the name of Yahweh, Jesus, Allah, and even Buddha, weirdly enough,” Xenu bellowed to reporters on Monday. “In a way, that sort of mindless killing is what Scientology has all been building up to, at least in my eyes. All it will take is for a couple dozen of you to pervert that bastard Hubbard's teachings to emphasize my dominion, and voila! Centuries of religious strife.”

Lord Xenu, who was of course responsible for the nuclear-volcanic destruction of trillions of sentient lives, only to have their souls captured and brainwashed with false prophets before being set loose to inhabit the bodies of our earliest ancestors, is rightly regarded as the antagonist of Scientological teachings, and purging the body of these souls, or “thetans,” as the ultimate goal of practicing the faith.

However, the space tyrant predicts that it is only a matter of time before an aggressive offshoot of the religion embraces their thetan-driven neuroses, and takes up arms to intimidate and slaughter indiscriminately, to an angry chorus of “Hail Xenu!”

“To destroy another's physical form may be counter to what Scientology actually teaches, but hey, that's never stopped religious nutbags before,” the alien chuckled to himself. “After all, it is much harder to become 'clear' than it is to shut off the mind's eye, and profess to have found all of the answers in the embrace of my fascist bosom.

Analysts suspect that the perversion of Scientology may already be taking place, as Hollywood lawyers have gathered to find loopholes in laws against hunting humans for sport. Furthermore, Tom Cruise recently announced that half of his earnings from Mission: Impossible 5 would go to something called the 'Force Field Disabler Fund.'

“Not to worry, pathetic primates,” Xenu spake, his eyes aglow. “If you suspect any of your friends have been radicalized, perhaps you can encourage them to seek psychiatric help... Oh wait! They'll never do that, now will they? Ah well, better luck next time.”