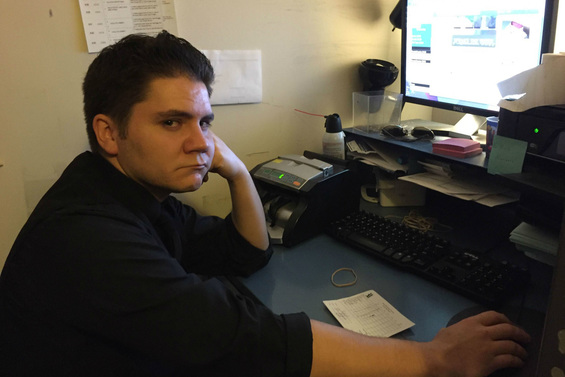 Photo courtesy of Jamie Medeiros
February 24, 2016 – Americans woke up Wednesday to find that Facebook had updated their interface to include new versions of “likes” known as “reactions,” which can express a wide range of emotions in response to a status. One sad, lonely American in particular, Garry Masterson of Green Point, Brooklyn, has stated his intention to review his previous decade of Facebook likes, and change them to a more accurate reflection of his feelings at the time.

“I've been waiting for an innovation like this to come along for years,” Masterson told reporters from his mortgage loans office in the basement of a Kinko's. “Facebook has always been a wonderful way to briefly communicate with my many friends; in fact, it is primarily how I've kept up with those I consider close to me. Finally, I can show them how I really felt about their various milestones and photographs of dinners or pets.”

Masterson, who is known primarily to acquaintances as 'that guy who spends a lot of time on Facebook,' says he has already started back in 2005 with his first year of college, at which point, he relays, there were many things that made him laughing face, but even more things that made him heart, in his miserable life all but devoid of human contact.

“I can already tell that I'll be at this for a while,” the piteous wretch sighed to himself. “I just hope this doesn't cut into the time I need to paint my miniatures, or to edit famous scenes from 80s television shows into rap songs for my own amusement.

“I suppose I could speed through some of these, but I'm really concerned with getting the tone just right,” the poor pathetic soul continued. “I'd hate to leave my previous likes of statuses about getting fired or deceased grandparents the way they are, as opposed to changing the thumbs up to a sad teardrop face like I am now.”

When last observed, the truly pitiable grown man had made considerable progress through his friends' timelines, but said that he has yet to find a proper context in which to use the face that appears to be offering oral sex.