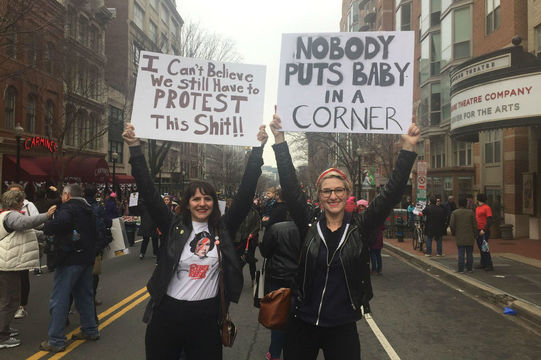 Pictured: Morgan Harumph (left), Cynthia Myrbles (right)
March 2, 2017 – Cynthia Myrbles, one of the 3.2 million protesters being paid $1,500 per week by the DNC and George Soros to participate in the Women's March on Washington and subsequent national protests, told reporters on Thursday that despite her newfound financial security, she really only views fake protesting as a stepping stone towards more fulfilling performance opportunities.

“When you're a struggling actor, you take whatever jobs you can get,” Myrbles told CNN's Jim Acosta. “Even when those jobs are offered by a shadowy progressive cabal operating behind the scenes, of which I am never supposed to speak. So for me, this is just a money gig, and something to get my face out there to HBO, or FX, or even the CW if they think I'm 'Buffy cute.'”

Myrbles, a Crown Heights resident who had been stuck waiting tables before being approached by Debbie Wasserman Schultz in an elaborate disguise, went on to say that she hadn't been super familiar with the sweeping political movement for which she and millions of others have been significantly compensated to take part in, but apparently her mother has been a big fan of it for decades.

“It's like a 60s reboot or something, right? People taking to the streets, becoming more aware and invested in political issues, fighting the powers that be through civil disobawhatsit... I dunno, I kind of padded my resumé for this one. I was honestly surprised to get the callback from Mr. Soros.”

The no-longer-struggling actress also confessed that she found herself rather intimidated by her competition.

“A lot of my fellow paid protesters seem like they've been at this for a while. What's more, they give off a sort of effortless acting vibe, as if they are truly concerned about the direction of our country under the current administration. I can practically feel their desire for the massive marches across the United States to have a tangible impact on the future they leave for their children. It must be the Stanislavsky method or something.

“Anyway, I'm not gonna let my insecurities get the better of me. You gotta fail before you can succeed, so I'm just gonna keep showing up with the signs and shouting the things until I get picked up by Hollywood. I've got goals, baby. Acting is just the start, what I really wanna do is direct.”

Myrbles admitted that, if nothing happens for her right away, she could live very comfortably on $1,500 a week just from fake protesting for the next four years. She only wishes that her fellow male fake protesters weren't receiving $1,900 per week instead.