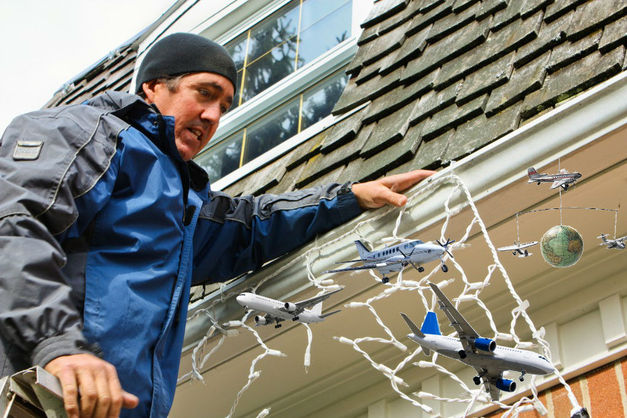 November 14, 2014 – Wary but adamant about his love of the observance day that takes place on December 17th, Astoria man Gavin Toteburg has gone ahead with his plan to begin hanging Pan American Aviation Day decorations outside his home, despite concerns that neighbors may consider it far too early in the season for such an ostentatious display.

“I was raised in an aviation household, so stimulating interest in commercial and hobby flying in the western hemisphere has always been really important to me,” Toteburg told reporters. “I'm not trying to get the jump on my neighbors with these decorations, but I say if yours aren't up by Thanksgiving, you've lost the Aviation Day spirit.”

Early displays of airplane and mobile decorations have been a controversial subject in the United States for a few decades now, as Aviation Day seems poised to swallow other observances whole, such as Pearl Harbor Remembrance Day, or even Diwali. Proponents of the day, such as FOX News, counter that there is a War on Aviation Day, and that the only way to fight back is with captain's hats for the kids and lawn turbines.

“It's not that I have anything against Toteburg's hobbies, or his gaudy decorations,” said neighbor Nancy Borgwich. “I just don't think Pan American Aviation Day should be a federal day of observance. I say the president should make his annual proclamation about something else, like tolerance towards boat enthusiasts. Separation of airport and state, and all that.”

Regardless of his neighbors' icy stares, Toteburg stands proud of his house display, and vows that he will not remove a single jet hanging until everyone in Queens addresses him with “Merry Aviation Day,” instead of the more PC “Happy Observances.”

“They scoff now, but come December they'll all have their front lawn LaGuardia scenes up too,” he said. “I have to take a stand for what I believe in now. If I let Aviation Day slip, next thing you know, nobody's observing National Library Workers' Day in April, and then where will we be as a nation?”