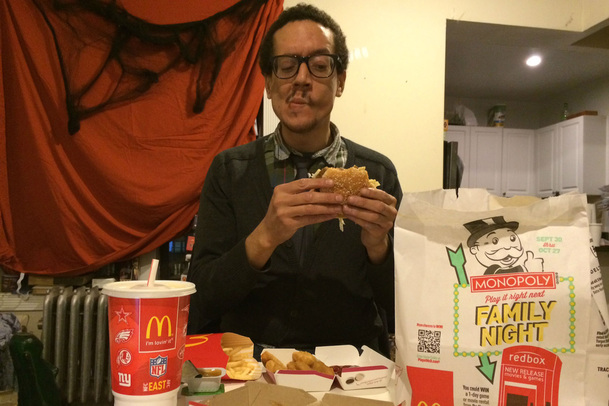 Photo courtesy of Andrew Sanford
November 7, 2014 – Following a much-anticipated stop at his oft-visited neighborhood McDonald's on Saturday, Jerome Tucker, 26, of Harlem, New York became wary that the Big Mac, of which he had already eaten six, may be largely devoid of nutrients and may, in fact, be detrimental to his overall health. This revelation led Tucker to place his entire meal, which also consisted of large fries and a 10-piece McNuggets with sweet & sour sauce, under increased mental scrutiny.

“I've always had an instinct that McDonald's may not be the best thing for my health,” Tucker pondered in regards to the company which, by law, displays the total calorie content of every food item on their menu. “I mean, there's lettuce and sesame seeds and stuff, but I'm not sure that balances out the two patties smothered in sauce between a seemingly impossible amount of bread. I should probably do more research.”

Tucker, who had taken careful steps to place himself in the subway car closest to the McDonald's exit so he wouldn't have to walk too far, began to consider tossing the remainder of his seventh double cheeseburger, but concluded that that would be a senseless waste of barely qualifying foodstuffs.

“I probably shouldn't have ordered the large soda either, but as a being of free will, I simply have to appreciate the savings. Besides, it's all about balancing your diet with exercise. I should be able to just walk it off on my way to work,” he thought, referring to his next shift this coming Monday.

“I just have to believe that they wouldn't sell something as food if it could actually harm my body,” considered the adult man who had, just 25 minutes earlier, handed his credit card to a disgruntled minimum-wage employee. “Plus, if that was the case, you'd think somebody would have made several books, episodes of television, and both fiction and documentary films with McDonald's at the symbolic center of criticism. Aw man, all the fries are gone.”

When questioned by his brain about what their next activity would be, Tucker answered with a yawn and passed out on the futon for three hours.