Local Man Only Able to Emote During Pixar Movies 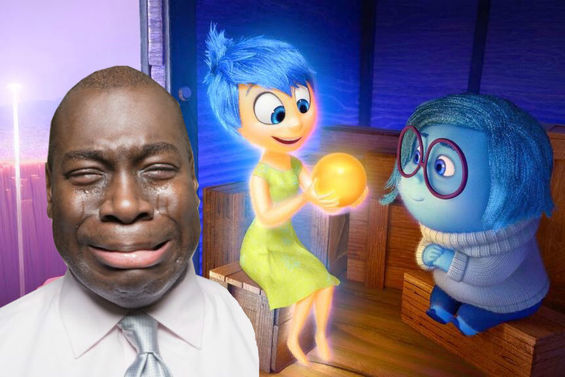 
June 22, 2015 - Harlem resident Dante Chapman is described by friends and family as “emotionally demonstrative as a German U-Boat.” Yet on Friday evening, the 42-year-old father of three was found openly weeping and rolling around in a fetal position during a 7:30 screening of Pixar’s latest film, Inside Out. Though disturbing to many patrons, and hilarious in the eyes of an unsupervised group of seven-year-old boys, none of this came as a surprise to Chapman’s wife Louisa.

“Dante's not the kind of guy that says ‘I love you’ or chokes up during funerals,” Mrs. Chapman told reporters. “He’s more the guy that gets for mistaken for a Terminator.” Dante’s mother Mary agrees with her daughter-in-law’s assessment. “I was shocked to learn that he hadn’t become a serial killer,” said Mary. “When each of his three daughters were born, friends and family could expect the same message every time: ‘Baby’s here.'”

Regardless of his usual demeanor, Louisa knows her husband has one emotional trigger: “Something about the Pixar movies gets him every time….except for Cars 2.”

Louisa first noticed the trend when Dante watched Toy Story with his three daughters. “I was enjoying a hot bath when all three of my girls came barreling up the stairs worried that Dante had lost his mind. Apparently, seeing Buzz Lightyear’s crest-fallen look during his failed flight attempt had set off a tear-filled rant about broken dreams, delusion, and the conflict of fantasy vs. reality.”

Despite lingering concerns and similar results with Pixar’s subsequent releases, Louisa was able to ignore the problem until Dante suffered a nervous breakdown during the opening of Up. “He gripped me like a terminally ill patient saying his last words, and told me and the girls that we were his biggest adventure. It was oddly prophetic, but truly traumatizing at the same time.

Louisa and Dante sought help from renowned psychologist Dr. Monar Ysplanti. “Dante’s case is as hard to solve as a Rubix cube covered in baby oil,” Ysplanti explained. “At first we thought Mr. Chapman simply connected with cinematic emotions over real life, but attempts to illicit similar reactions with Old Yeller, Field of Dreams, and Brian’s Song were all unsuccessful… it has to be Pixar.”

Dr. Ysplanti says the oddities of Chapman’s case don’t end there: “Mr Chapman’s emotional responses and understanding only occur when the movie is on. Watching Mr. Incredible tell his wife he can’t lose her again or Marlin reuniting with Nemo trigger very emotional discussions about the meaning of marriage and parenthood. Yet we weren’t even able to get a facial tick after we staged the murder of his entire family in front of him… it’s truly disturbing how little he seemed to care.”

Despite a lack of answers, Louisa says the change of pace is nice every now and then. “I will always love Dante for being the brick wall of empty facial expressions he is, but seeing him cry during these movies does make it feel less like I'm married to a robot or axe murderer.”