Local Family Concludes Passover Seder Without Arguing About Politics, Or Anything Relevant 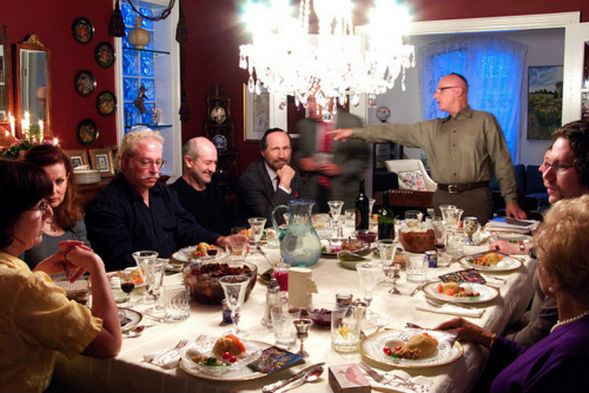 Photo courtesy of Jennie Faber
April 4, 2015 – It was reported Friday night that the Moskowitz family of Manhattan had successfully celebrated another Passover with all their extended relatives, without once dipping into political or social conversations. Instead, they managed to filter all their deep-seated hostility through passive-aggressive barbs about one another's careers, the food, and Brenda's lack of children.

“It was clear from the get-go that several of the relatives wanted to loudly discuss the recent Israeli election, which could have proven disastrous,” said Larry Moskowitz, 49-year-old father of two. “Luckily, focusing our negative energy on the blandness of Aunt Muriel's kugel prevented any engagement with important cultural issues.”

The Moskowitzes, renowned almost as much for their conflicts about cousin Jean's marriage prospects as for their reticence to discuss the real world in any meaningful way, gathered all 15 available relatives into a cramped Upper West Side dining room for three hours, without once delving into any disputes more serious than about young David's lack of formal attire.

A rare source of harmony also manifested itself in the form of criticizing Uncle Mort, who couldn't make it due to his so-called “financial troubles.”

“It was a huge relief that we powered through dinner the way we did, especially considering that every member of the family is an active advocate of one political party or the other,” reported Shane McBuffin, converted Jewish family member by marriage. “I don't think we could have done it without taking sides on how well-cooked the brisket was.

“All told, I'd call it a successful Seder,” he concluded. “It wouldn't have been healthy to bottle up all those strong feelings until heavy wine consumption set them loose. We're not Protestant's, for God's sake.”

Upon leaving, several of the Moskowitzes agreed that they should get together again for Chanukkah, when the primary elections will be in full swing, so they can finally settle who's rich enough to take care of Grandma.