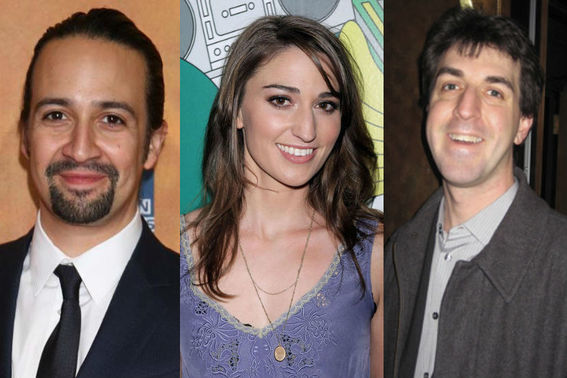 August 18, 2016 – The theatre world has been rocked by the recent announcement of a new project co-helmed by musical scribes Lin-Manuel Miranda (Hamilton), Sara Bareilles (Waitress) and Jason Robert Brown (The Last Five Years): a line of full-length pants featuring compartments made of Tupperware, to keep both your food and your fashion fresh.

“We were hanging out at an industry gathering at Sardi's over the weekend,” Bareilles told reporters. “What with our recent Broadway success, I told Lin we should consider collaborating on a new musical sometime.

“He said, 'I'd love that, but for now, I've got an even better idea: pants that keep your sandwich from going moldy, and free up both hands to carry other stuff!' I was on board within seconds. I can't believe no one ever thought of this before! But that's Lin-Manuel for you, always innovating.”

“Sara's being way too modest,” Miranda chimed in. “She made sure we patented the pants the next day, and it was also her idea to bring Jason on board. His attention to classical styles should ensure that Tupperpants maintain the traditional appearance of pants, while still being both stylish and functional!”

The three theatrical up-and-comers insisted that they have in no way abandoned their musical pursuits; they did clarify, however, that their respective sabbaticals may extend a few years while they fine-tune and perfect their food-protecting pants. It's important, they say, that when something is new, it not simply be rolled out on the main stage before being workshopped in DC or Seattle. To quote Brown, “God forbid we debut the China Doll of pants.”

“The theatre world can wait patiently for the next Hamilton or Book of Mormon,” Brown elaborated via phone, having been unable to attend the initial press meeting. “We're all about reaching the widest audience possible, and right now, it's pretty obvious that the world needs Tuppertrousers more than another unaffordable Manhattan-bound stage production.”

“To be honest, there has already been a bit of creative tension,” Bareilles admitted, responding to press speculation after Miranda had left for a prior engagement. “Lin and JRB just can't back down from the name Tupperpants and Tuppertrousers, respectively. I gotta say, they may seem pleasant, but those boys can be real dicks when their back's to a wall creatively.

“I can assure you though, that by whatever name we settle on, Tuppertrunks will be debuting at Macy's this fall!”

Not to be outdone, Robert Lopez and Stephen Schwartz are attempting to steal the spotlight with the announcement that they're working on a new type of engagement ring that plays music when you squeeze it.