Legion of Doom Pulls Funding from ISIS After PR Disaster 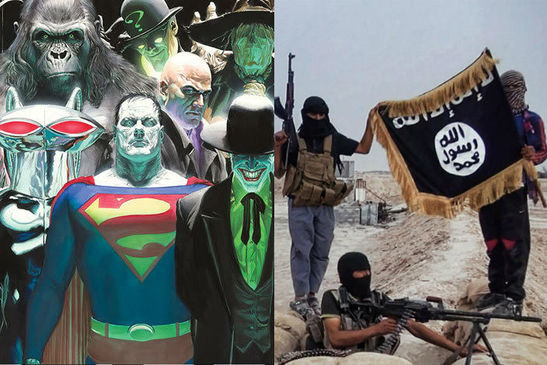 Art by Alex Ross; photo from Welayat Salahuddin
August 11, 2014 – The Islamic State of Iraq and Greater Syria (ISIS), a terrorist organization quickly sweeping through northern Iraq, has proven so volatile that their former partners in al Qaeda disavowed any involvement with them back in February. Now, following the capture of the Mosul dam and the slaughter of hundreds of Yazidi villagers in the past week, another high-profile group, the supervillain's union the Legion of Doom, an affiliate of LexCorp, have severed all business ties, calling the militants “a public relations disaster.”

“ISIS seemed like a good fit for our organization at first,” said Lex Luthor, notorious CEO to both the Legion and LexCorp. “But the past few months have been an internal struggle. Captain Cold read about the alleged beheadings on HuffPo, and Cheetah wasn't crazy to hear that as many as 300 Yazidi women have been taken as slaves. I mean, we're a ruthless organization devoted to fascistic order and personal gain through destroying the Justice League, but that was all a bit much. In the end, we had to let them go.”

The Legion of Doom, operating primarily out of the Eastern United States, is known for their grand plots which often involve kidnap and ransom, eco-terrorism, mind control, or 50-foot-tall robots knocking over skyscrapers. So it came as no surprise when they proudly announced their affiliation with Abu Bakr al-Baghdadi and his caliphate back in 2012, following the full withdrawal of U.S. troops from Iraq. The relationship has been strained ever since.

“When Luthor told me that ISIS may release a 65-foot wave from the Mosul dam that could kill as many as half a million people, I was like, 'Awesome!'” said Black Manta. “Finally, someone else who gets our style! Seriously, I feel like, given the right circumstances, even Aquaman and I would see eye-to-eye with that plot.

“But the more I thought about it, the more I realized that it wasn't the shameless, polluting first-world bourgeoisie who would fall victim. It's the poor Iraqi natives and displaced Syrian peoples who haven't had a stable government in years, and are now living under constant fear of death in makeshift huts. That's when I cast my no vote.”

In the end, it wasn't just ISIS's methods that many Legion members found off-putting, but their motives as well. Most of the villains don't openly advocate murder, but even the ones who do have a solid handle on global geopolitics. Even Gorilla Grodd, an exile from Gorilla City, said that though he understands the temptation to lash out indiscriminately when spurned by society, “the only way to achieve true vengeance is by targeting those so-called do-gooders who are pulling the strings, be it the western world at large, or the Flash and his precious League.”

“Bizarro am confused by jihadist misinterpretation of core Muslim values and mandates,” Bizarro added. “ISIS am achieve nothing through alienation. Is bad.”

Despite no longer having any direct attachment, the Legion of Doom confessed their hope that continued action by ISIS would finally show the world the futility of relying on the Justice League to save them. Much like the Iraqi and Afghani people after heavy American influence, they say that Earth must learn to stand on its own two feet when Batman's spy satellites inevitably fall from the sky.

“I ask you, people of Iraq and the world,” Luthor proclaimed with gusto, “where is your Superman now?!”