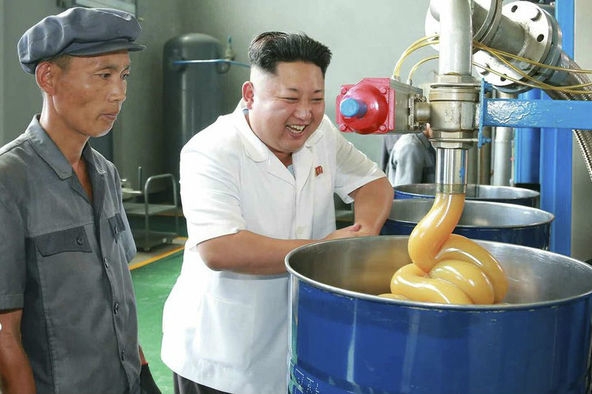 Photo courtesy of Korean Central News Agency
January 8, 2016 – In a rare break from his usual dreary decorum, Supreme Leader Kim Jong-un was all smiles and giggles in a video address to the world's leaders on Wednesday, during which he announced that the Democratic People's Republic of Korea has discovered the secret to more effective long-range nuclear missiles, via his favorite viscous substance, factory-made lube.

“Our nuclear weapons are now the strongest, most dangerous, and sleekest in the world,” Kim said in his address, wearing an ear-to-ear grin that actually made his hair rise slightly higher at the ends. “All Western powers should quake in fear of our L-bomb, which will rain slick, glossy death upon the enemies of the DPRK.”

While the manufacturing location of these lubricated explosives remains a heavily guarded secret, the lube itself is thought to be produced at the Chonji Lubricant Factory, a state-of-the-art industrial complex devoted to the advancement of the state, as well as the Supreme Leader's favorite place to spend an afternoon.

“Our missiles can fly anywhere in the world due to minimized wind resistance,” Kim continued, his cheeks quivering with unrestrained joy. “Any attempt by enemy aircraft to shoot the nukes down will also be met with failure, due to the missile's polished, slippery surface.

“Soon, the world will bow before the great might of North Korea, thanks to this significant, history-changing advancement in lubesplosive engineering!” Kim then burst into fits of child-like laughter and clapped his hands repeatedly.

While the announcement has spurred fears among many, nuclear experts have expressed their doubts as to the validity of Kim's claims, though most admit that lube-based rocket tech would be pretty awesome.

“We have to remind ourselves, in the wake of this address, that Kim has a birthday coming up,” said Burch Biffley, communications director for the RAND Corporation. “The North Koreans have grown wise in their catering to the Supreme Leader, and they know that this one only really loves two things: threatening nuclear war, and industrial-strength lube.

“Our only concern should be, after a birthday present like this, where do they go from here? Kim Jong-un may never be this happy again, and that could spell trouble.”

Those fears may be for naught, however, as North Korean officials have already announced new research into a unique form of cloning, which could potentially resurrect Kim's father, Kim Jong-il, in the form of sentient lube.