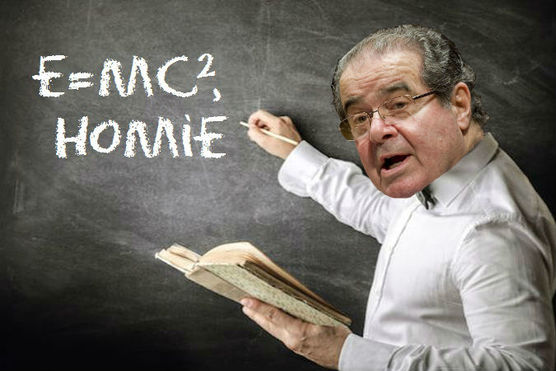 December 14, 2015 – Saying he may have discovered his true calling while hearing oral arguments during a vital affirmative action case, Supreme Court Justice Antonin Scalia has decided that, during the court's session break over next summer, he plans to establish, run, and help teach at “The Scalia School for Black Learnin'”, a self-named university for minority students requiring a “slower-track school” where they can “get their learn on.”

Saying that his college will help America's black students shake off the heavy burdens of racial entitlement and a top-notch education, The Scalia School will work hard to maintain realistic benchmarks which allow students from all black walks of life to become average lawyers, OK scientists, and all-around acceptable members of society.

“If there's one thing I know these young black men and women are sick of,” Scalia told reporters, “it's being placed in schools that challenge them academically and which afford them a high level of prestige following graduation. No, these kids would much rather attend an education institution that fosters healthy minimal expectations, that they might graduate and rise into their current circumstances.”

The Scalia School for Black Learnin' has the added benefit of putting as many black students as possible in one place, which helps establish a close-knit community of familiar backgrounds and customs, and helps keep those same customs away from the similarly close-knit communities of Harvard, MIT, Stanford and Cornell.

“Rest assured, classes at SSBL will make the student body feel right at home,” Scalia continued. “Teachers will exclusively be hired who know how to teach using the only language that every dark-skinned person in America speaks: the language of the streets. Also English.”

An early draft of the college's curriculum, which Scalia says will be open to all students liberal arts-style, includes classes in civil service, agricultural studies, thuganomics, and Jesus. All classes are currently 101-level, with no more advanced levels yet drafted.

News of the school's incorporation has received such heavy praise that Hollywood is already working on a potential biopic akin to Freedom Writers and Dangerous Minds, this time about a heroic judge who leaves the black robe behind, and helps kids who have worked hard to educate themselves out of the ghetto by providing an easygoing, uninspiring college experience. Early rumors suggest the lead role will either be played by Michelle Pfeiffer or Randy Quaid.

“I know I'm always talking about how difficult the minority experience can be,” Scalia concluded. “Honestly, haven't these black boys and girls been through enough, without also being challenged by top-notch professors and having their worldviews expanded? So while I can't fathom that any affirmative action students have indeed earned their places at Princeton or Yale, I can guarantee they'll all have a place at my school, learning things they already know then being spit right back out where they came from.”