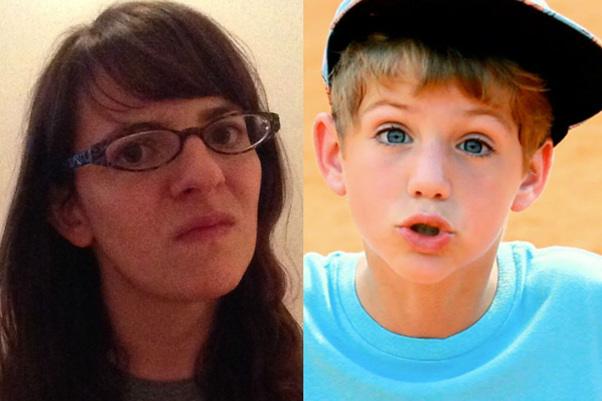 Left courtesy of Crystal Beth; right courtesy of Matty B Raps
October 6, 2014 – With sexism running rampant in modern American society, internet bloggers have been self-tasked with policing and calling out the most egregious offenders. On Monday morning, Jezebel.com staff author Morgan Harumph did just that, with a post titled, “This 8-Year-Old Asshole Spouts Sexist Poison On the Playground.”

Harumph's piece exposes the rampant misogyny of 3rd grader Tyler Davies of New Rochelle, New York, who refused to play with the girls in his class during recess all of last week. When questioned by his peers as to the impetus behind this refusal, Tyler off-handedly replied, “Girls have cooties and they are gross.” He then melodically chanted “I hate cooties” several times while hopping malevolently over to the jungle gym.

“Tyler exemplifies an attitude clearly shared by all men in America,” Harumph wrote of the young Mr. Davies in her article. “That it's OK to shit on women, make them feel like they're diseased or incapable, and exclude them from society. And all the while, the teachers stand by and do nothing, allowing Tyler's woman-hating regime to grow and fester!

“Maybe Tyler would prefer if little Betty wore a burka on the playground!” she wrote of Betty, at whom the cooties comment had been directed, and whose name, Tyler had discovered, rhymed with 'sweaty.' “Would that block the cooties? He probably thinks so, in his sociopathic little mind.”

Harumph's scathing report didn't just scratch the surface; throughout, the reader discovers intimate details of Tyler's life, forming an enlightening tableau of the mind of a pre-pubescent chauvinist. Apparently, Mr. Davies greatly prefers storytime with his dad, routinely interrupts his mom while she's speaking, and on more than one occasion has pointed at his sister's face and laughed, when she's doing nothing but attempting to go about her life as a societally handicapped 6-year-old.

“And people still wonder why men need to be held to account for their actions,” Harumph summarized. “This miniature fedora is an all-day, every day misogyny machine, and if he hasn't learned the implications of his hetero white cisgender male binary privilege by now, I fear it may be too late for all of us.”

The article, after fully emasculating Tyler and calling the little shit to task, also puts the entire school system on trial. In addition to calling for the immediate resignation of New Rochelle schools superintendent Brian Osborne, Harumph questions whether recess should even continue to be allowed, if it's to be used as a platform for male bigotry and vicious name-calling.

“I know that when Tyler, that ballsack, inevitably reads this article, he'll feel the shame his own parents should have instilled in him years ago. And that will be the moment all this well-directed critical energy of mine will be validated.”

When asked by reporters if he intends to issue a response, Tyler said, “I'm not a'posed to talk to stwangers,” before skipping away shouting “na na na na Batman” at the top of his voice.