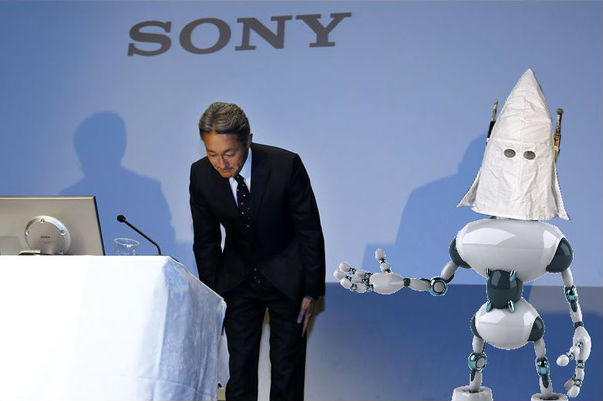 April 20, 2015 – In a surprise unveiling at the NAB Show last week in Las Vegas, programmers and executives from Sony Headquarters in Tokyo introduced an unsuspecting audience to A.B.E., the first artificial intelligence designed to mimic the absolute worst of humanity's intolerance and ethnocentrism.

Apparently, since 2013, Sony has been working in secret with Kawada Robotics to develop a AI capable of rational thought, followed by a full deconstruction of that process to instill the android with a fully mapped irrational hatred. Despite warnings that the current product may require tweaking to maximize insensitivity, Kawada and Sony decided to rush the robot to general production in order to corner the market on machine-made vitriol.

“As you can see from your spec sheets, A.B.E., or “Automated Bigotry Engine,” is designed to deliver 15 diatribes per minute against 27 different ethnic and national groups,” Kamada Software Guru Yutaka Kondo told the NAB crowd. “We'll have it up to 28 once his programming can differentiate between Germans and Austrians.

“Furthermore, he comes loaded with 70,000 completely unique and un-ironic ethnic jokes, for parties, and casual validation.”

The humanoid robot, sporting a pointy white hood for easy identification and data storage, was at one point released into the multicultural crowd to demonstrate its full capacity for defamation. Many targeted tech entrepreneurs admitted to feelings of deep emotional pain, and all agreed that it was an impressive display.

“Hello, <expletive>, I am A.B.E.. Go back to where you came from, and take the dirty <expletive> with you,” went one exchange. “How many of your kind does it take to change a light bulb? None, for you cannot afford one. I hope you feel sufficiently debased, <expletive>. You are the reason we cannot have nice things.”

The robot also displayed an impressive penchant for routine sexism.

“What began as a passion project has become a reality,” Yutaka said excitedly after the presentation. “Those who work in the field of robotics all seek to realize Turing's dream of an AI indistinguishable from human thought. Now, with the help of a few blacks and Chinamen, we've come that much closer by passing our historically rooted bigotry onto brand new artificial minds.”