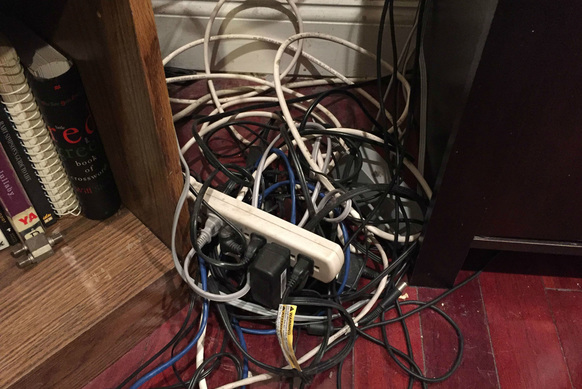 January 13, 2016 – Tech leaders and government officials have come together to announce the invention of a new holiday: as of this year, tomorrow, January 14, will be known as National Wire Untangling Day, a day in which families and roommates begrudgingly set aside time to unplug and separate all of the various electronic wiring that plagues their dens.

“In order to address this growing concern among tech-heavy households, we decided to go the fun route and make a celebration out of untangling all your devices,” said Geraldine Grunch, U.S. Secretary of auxiliary holidays. “Now while you work you can put out treats, maybe even some bourbon, and play music from whatever source doesn't need to be plugged in.

“Sadly we were unable to make this a full federal holiday, so there's no paid time off from work,” she continued. “Which is a particular shame, because if the average American family is anything like mine, this untangling could well be a full day's undertaking.”

Officials hope that this holiday will be enjoyed by all Americans, without conflicting too much with the simultaneous medieval Christian celebration, the Feast of the Ass.