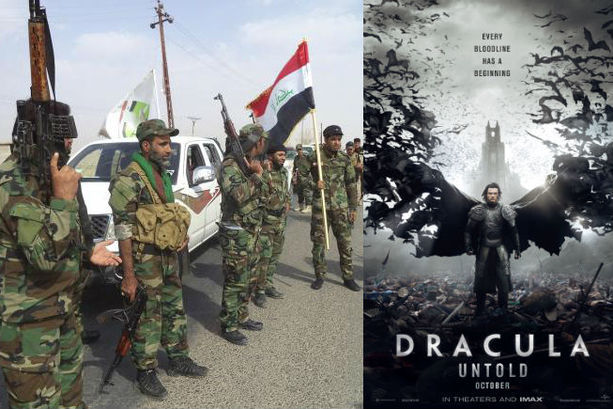 October 7, 2014 – The beleaguered nation of Iraq has suffered the cruelty of ISIS since 2011, a terrorist group drawing much of its power from religious sectarian disputes. Now, in a possible turn of fortune for Iraq's innocents, many Sunni and Shia Muslims have set aside their differences and banded together by finding common ground in disdain, both for ISIS, and for trite, ill-conceived origin films about infamous horror characters, including Dracula and Norman Bates.

“Despite previous reservations, we are all very excited about this new cultural union, almost as excited as we are about Shocktober,” Shi'ite sheikh Abu Gyath told reporters, referencing the deeply held Muslim tradition of enjoying a month of horror films in the lead-up to Halloween. “There's only so much a divided people can take before we say 'enough is enough.' No more beheadings or ethnic cleansing, and no more exploitation of a built-in fanbase to pointlessly explore the roots of a beloved villain's psychosis. We are united in this.

“I mean, Dracula Untold? Really? For the love of Mohammed,” he went on. “Vampires aren't supposed to be sexy tortured souls! They're monsters! Isn't Coppola's interpretation enough for people?”

The cultural rift between Muslim groups, which merely added to ISIS's strength, began to close when Sunni tribes and Shi'ite townsfolk came together to oppose them in northern Iraq, near the border with Syria. While the alliance was at first very tense, the Iraqis slowly bonded over their love of original horror cinema, and their equal contempt for shoddy, over-serious childhood dramas about Michael Myers and Hannibal Lecter.

“Allah knows I could give two shits if Leatherface had a lousy childhood,” said Shammar tribal leader Abdullah Yawar. “What's the point of trying to round these characters out? They're less frightening that way.”

“The worst part is that some of our disciples will still pay full price to see these movies, which the producers are banking on,” Gyath chimed in agreeably. “Personally, I'd much rather wait for these cinematic abominations to arrive on Netflix, so I can sit in judgment from the comfort of my living room, when I have nothing better to do.

“Once hostilities are over, and Iraq is at least somewhat stabilized, Abdullah and I are going to trade our Freddy and Jason box sets,” he added, smiling. “If this alliance holds, maybe we'll even watch them together.”

Religious leaders were last seen rallying and stoking the anger of allied national fighters by reminding them of ISIS brutality, and that Annabelle is now in theaters.