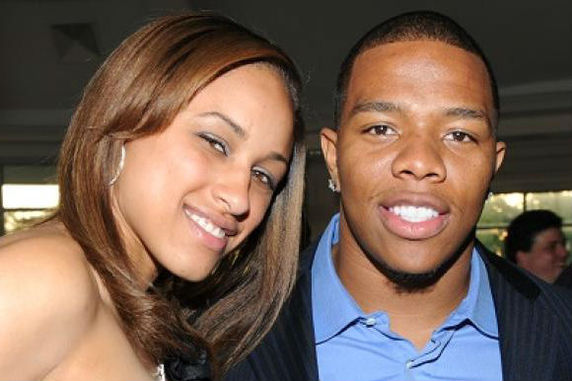 September 9, 2014 – Much controversy has surrounded former NFL star Ray Rice and and his wife Janay since February, due to a recorded altercation which left her unconscious prior to their nuptials. Many have questioned the decision to follow through with the marriage, but Mr. Rice wants everyone to know that he decided then, despite his reservations, that Ms. Palmer's inability to take two punches from a 212 lbs. running back without losing consciousness would not hinder their ongoing relationship.

“Marriage is all about compromise,” Rice told reporters at a press conference alongside his wife, who nodded in agreement. “Everybody has their issues. For me, it's that I'm a little impatient, and I sometimes overreact. For Janay, it's a penchant for collapsing under the force of a deliberate, well-placed blow to the face. Maybe people can change, but also, love is never perfect.”

Rice, who was originally suspended for only two NFL games for his wife's lack of endurance, was later suspended indefinitely when the full footage of the quarrel was released by TMZ. The NFL's decision came down in light of the fact that, apparently, knocking out your unsuspecting spouse actually looks worse than it sounds.

“It was a tough couple of months leading up to the wedding,” Rice confessed. “I'm a very traditional guy; I like to think that marriage is forever. So I had to ask myself, 'Is this how it's going to be? Me taking swings, her going down after just two or three? I don't know if I have the fortitude.' But I fought through the apprehension, folks. We came out the other side, me with renewed love, her with a stronger jaw.”

Mrs. Rice, who had previously apologized for “the role I played in the incident that night,” nodded quietly throughout the press conference, before apologizing once again to any Ravens fans who were disappointed by the outcome of this event. “I promise you all this,” she told reporters, “I'll be training nonstop during this suspension and, with hard work and a little help from God, I'll be up on my feet and staying that way in no time.”