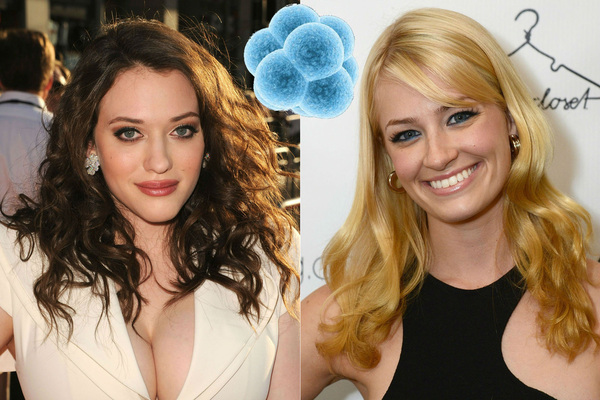 January 7, 2015 – With the controversial views held by not just one, but now two actresses from The Big Bang Theory swirling around cyberspace, the internet is chomping at the bit for more dividing political statements from career performers. Thankfully, Kat Dennings and Beth Behrs of 2 Broke Girls have stepped forward to share their expert opinions on embryonic stem cell research.

With the subjects of vaccination and modern feminism thoroughly exhausted by the blogosphere, the Broke Girls felt it was time to break out a more classic subject of national dissonance. Better yet, each actress, neither one holding a degree in biomedical sciences, has a very different viewpoint on the potentially disease-eradicating baby cells.

“I've always felt strongly in favor of both embryonic and fetal stem cell research,” Dennings told entertainment reporters when asked the question at a Comic Con panel for the Thor film series. “If there's even a chance that humanity could achieve perfect health, nay, immortality, then any moral ambiguity gets tossed out the window.”

Meanwhile, Dennings' co-star Beth Behrs, often referred to as 'the one who is not Kat Dennings,' had some harsh words in response to the sentiment of her fellow drama professional regarding this scientific matter.

“For those of us who believe that life begins at fertilization, the growth, exploitation, and destruction of embryos is tantamount to murder,” said Behrs, a graduate of the UCLA School of Theatre, Film and Television. “There is no conceivable excuse for ending a tiny, clumpy human life to further our own goals.”

“Look, Beth and I are friends, but this has been an ongoing point of contention between us for four years,” Dennings responded when chased down by TMZ. “It's easy to stand on the hard pro-life side as a healthy young adult, but should either of us one day be struck with a debilitating disease, I hope we live in an America that allows us to crack open a sealed plastic pack of stem cells and mix them into our corn flakes.”

In response to the new revelations about these lifelong entertainers, all Buzzfeed articles titled 'Which Broke Girl Are You?' have added the question, “What would you so if you saw a fetal stem cell walking down the street?”

Not to be outdone, Community's Gillian Jacobs proclaimed at a press junket her belief that domestic drone strikes against US citizens do not violate the Constitution, so long as said citizens have access to privately owned combat drones with which to defend themselves.