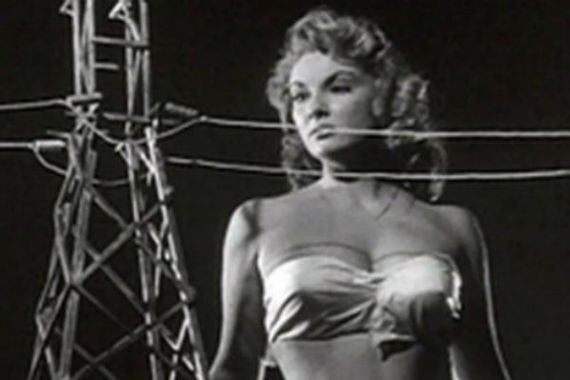 March 8, 2016 – This Tuesday, normally a day set aside for the celebration of the social, cultural and political achievements of women around the world, also gave rise to a controversy surrounding the attire of one of the world's most prominent and visible female role models: the 50-Foot Woman of Tarzana, California, and her allegedly skimpy bed-linen coverings.

The woman in question, approximately 15.2 meters in height and preferring to be called Nancy, was previously thought deceased following her rampage in 1958, but had instead exiled herself to an undisclosed location in Hawaii. While normal-sized humans don't see much of her nowadays, some conservative fashion police are questioning whether we can still see too much of her.

“Mark my words, Ms. Archer knows exactly what she's doing,” Elisabeth Hasselbeck insisted on Fox & Friends. “She may call herself a recluse, but with an outfit like that, you know she's just looking for attention. I don't care if the space radiation that first transformed her into a giant has kept her skin young and her body rockin', there's just no need to flaunt yourself to the boys like that!”

“Now I know we're not supposed to judge women's bodies,” Steve Doocy chimed in before blasting on. “And God forbid our nation's women ever be subjected to Sharia law. But all that being said, what message does this, let's face it, this raggedy bathing suit send to children? Worse yet, what if she's walking by and my son look up as she passes? What's he gonna see?”

While feminist voices have been quick to defend the female behemoth against conservative critics, the community does seem split on how such an iconic woman should be expected to present herself. Most view her disregard for sensible garb as a form of sexual empowerment, but some worry that young girls will get the message that their irrationally large bodies are all they have to offer men and the world. Still others wonder if Nancy's simply been unable to acquire clothing that fits.

“I've known Nance for quite some time,” said longtime activist and feminist scholar Gloria Steinem. “And she would agree with me when I say that women accomplish nothing by trying to tear each other down for something as trivial as how they dress. I can also tell you with certainty that Nancy is not motivated by tabloid exposure, or by photos in People magazine or the Journal of Scientific Exploration.

“Hell, she hasn't been motivated by much since she sought to avenge herself on her unfaithful husband by killing his mistress and carrying his body to the outskirts of LA, only to be taken down by the local sheriff. She and I have that in common, I suppose.”

When reporters attempted to reach Ms. Archer for comment at her island jungle hideaway, they were informed that she was attending a luncheon with Yao Ming, Gwendoline Christie, NYC Mayor Bill de Blasio, and Bigfoot.