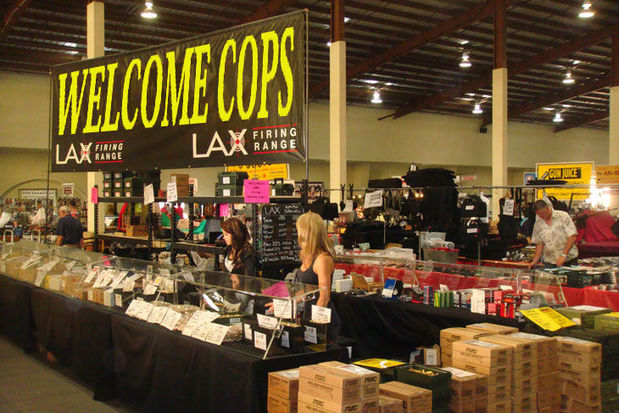 May 19, 2015 – With new federal restrictions placed on the transfer of military equipment to domestic law enforcement, American police forces are seeking other means of obtaining weapons and vehicles designed for use in a warzone. In response, private gun shows have taken the opportunity to remind the cops that, thanks to the feds, they can get away with selling just about anything.

“In the best parts of the country, background checks are still not mandated at privately-run sales events,” said Dallas gun show organizer David Scrimshank. “So if any cops out there are looking to score some awesome, slightly used military hardware, like grenade launchers or .50-caliber ammunition, well, they know where to find us.

“No one here is gonna ask if you're a convicted felon, a violent spouse, or a sergeant of the Dallas P.D.,” he went on. “Just leave your badge at home, and come chill amongst us questionables.”

The new measures make certain equipment illegal for law enforcement, while other hardware such as drones and explosives can be granted with permission and training. Despite having the right to obtain this gear responsibly, some impatient police departments have opted to go the faster route of paying extra cash to a shady individual they've never bothered to investigate.

“This country was founded on the right to bear arms,” one Missouri officer told reporters. “And while our culture still permits us to carry utterly unnecessary ordnance with the right supervision, sometimes you just have to cut corners to hit a hippie with a tear gas grenade today, not five days from now.”

In addition to accessing otherwise restricted weaponry, the gun shows provide the officers an opportunity to mingle with members of the community they've never interacted with before, including gun store inventory managers, aggressive firearm enthusiasts, and private sellers with records in bordering states.

“Honestly, these new federal restrictions are a godsend,” Scrimshank said. “Sales of handguns are higher than ever, but our sellers couldn't ever seem to get rid of their armored vehicles and weaponized aircraft. They'd just take up space in the parking lot every year, but cops love those things.”

As if the gun shows were not enough, the military leadership of Qatar is rumored to be opening a resale shop next to the Baltimore police headquarters.