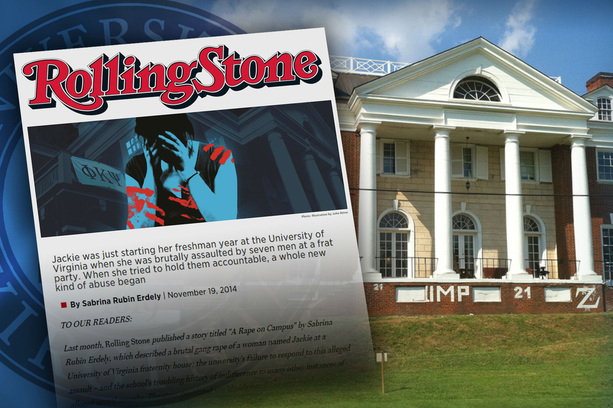 Image courtesy of PBS
December 9, 2014 – Early research by the Berkeley Media Studies Group seems to prove that, following an isolated incident of shoddy journalism regarding campus sexual assault, fellow journalists gain intense satisfaction from kicking Rolling Stone magazine while it's down, as opposed to grappling with the much more depressing topic of actual college rape.

The kicks began after Rolling Stone apologized to readers on Friday for potential discrepancies in their account of a horrific sexual assault at the University of Virginia. The apology has since been revised, giving peers more fodder to take a journalistic dump on the editors' doorstep, and thankfully distracting us all from the harsh realities of campus danger.

“We in the media had a good time ripping into Nancy Grace after the Duke lacrosse story scandal,” said ABC News president James Goldston. “But it's been years since we've had something we could really sink our teeth into, to take our minds off the dreadful statistics of rape in America. Just when it seemed like we might have to put a face to those statistics ourselves, here comes Rolling Stone to do a piss-poor job of it, and now we get to just talk about that for the next month! Feels good.”

The Berkeley Group's study gauged the reactions of 20 different publications to the Rolling Stone blunder, which saw a significant increase in dopamine transmitted to the pleasure centers of the editorial board whenever it was mentioned. Conversely, the control group, which involved any investigation of confirmed assault allegations, showed significant transmissions of bummersauce to all parts of the body, alienating readers and making journalists feel all icky.

“We would all love to be focusing our attentions on legitimate victims of sex crime, but shitting on those smug liberal bastards instead is just too satisfying,” said CNN president Jeff Zucker. “And the best part is, we can even say it in our coverage! 'The worst part is, this has taken the media's focus off of campus rape in favor of covering Rolling Stone.' And then we keep covering Rolling Stone!

“Sorry, I got carried away there for a second,” Zucker said, dabbing his eggplant-shaped bald head with a handkerchief. “We just really needed this break. Blitzer was all up my ass saying he wanted to go somewhere they cover real stories, but even he's rubbing his little Wolf nipples over this right now.”

When asked how they were coping with this complete lack of support from their peers, Rolling Stone said they now understood how a rape victim must feel, then immediately apologized again as the rest of the media went apeshit.