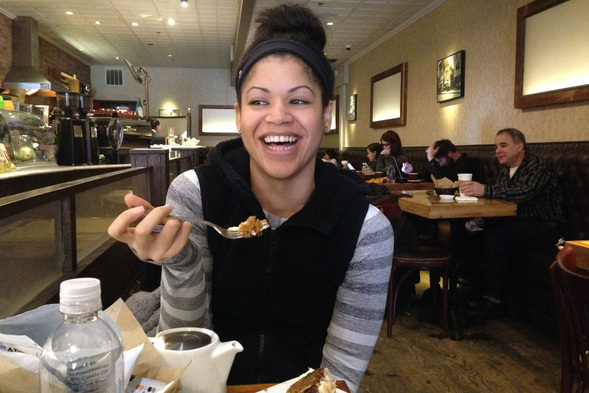 Photo courtesy of Diana Sanchez
February 4, 2015 – It was reported last night from the Caffe Bene on Riverside Drive that confirmed human female, Genevieve “Jenny” Bello of Washington Heights, has been formally labeled 'quirky' by several male friends and admirers, due primarily to the pleasure she derives from the natural act of food consumption.

“I like food a lot, sometimes even food that's not particularly good for me,” she said, to the astonishment and appreciation of assembled male reporters. “I know a lot of girls just stick to salads or tiny meals that could feed a hamster, but I guess I'm not like a lot of girls.”

The act of savoring food, sometimes in considerable amounts, has elicited greater attention towards the maverick Ms. Bello from various would-be suitors, all of whom also enjoy ingesting foodstuffs for energy and sustenance, but never thought they'd come across a female counterpart who shared this interest.

“I've wanted to make a move on Jenny for quite some time,” said a stout, bespectacled coworker of Ms. Bello's who requested to remain anonymous. “Especially since she told me she's also into warm climates, and 'all kinds' of music. She's just so unique and out there!

“Now that I know she likes eating stuff, maybe I can break the ice that way. I can bring up how the natural process of digestion fuels the human body, and is required in order to prolong a healthy lifespan! She seems like the kind of quirky girl who would totally get that.”

In an updated report, witnesses confirmed that Genevieve not only enjoys the taste of various edibles, but the aromas as well, further arousing men's suspicions that she is, in fact, one-of-a-kind.

“When I first asked Jenny out, I didn't know what to expect,” reported Zachary Shumps, current almost-kind-of-boyfriend of Ms. Bello. “We just got drinks, and I learned that she's an independent spirit who comes from a strong family and has big career aspirations. Which is all well and good, but I've been down that road before. Now that I know she's into burgers and empanadas as much as I am, well, it's a whole different story.

“She's just unlike any other woman I've ever met,” Shumps continued. “She likes to eat.”

Following this breaking news, an assembled panel of male behavioral experts confirmed that, should Bello also be into movies, she might be the whole package.