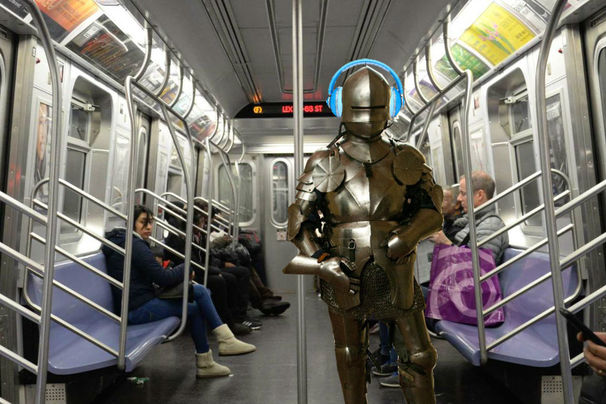 September 9, 2016 – These days, many women seek to shield themselves from male attention by donning noise-canceling headphones along with a full body-covering assortment of Gothic plate armor. But that doesn't mean you can't talk to them. You just gotta be cool about it, brah.

Now it should be established up front that some women who are listening to music whilst clad in medieval plate armour are just trying to get home, or to the office, or the gym, or the nearest Renaissance Faire, and the last thing in this godforsaken world they want is for their day to be ruined by the insistent advances of some creep who can't take hints from body language or 15th century defensive garb. But that should be no deterrent for any true manly man; after all, the vast majority are just desperate for a boyfriend, or at least, a boy-toy.

With that in mind, and a raging libido, here are the steps for how one should proceed:

Stand before the lady at a distance of about 1.5 meters, or 1.3 Flemish ells.

Smile unflinchingly at the maiden, and simply assume that she is smiling back at you through the visor of her bassinet.

If she does not immediately lift her gauntlets to remove the headphones, it means she has not yet noticed you. Wave your hand erratically in front of her bellows visor until you catch her attention.

She will remove the earpieces eventually. Just be patient, and resist the urge to flick her pauldrons in order to make a bell noise, or to slyly caress her rondels, lest you wish to experience a sabaton to the gonads.

Once the headphones are off, initiate conversation. Something like:

“Why, what business hath a fair princess such as yourself in visiting my meager peasant's village disguised as a noble knight? Also, do you have a boyfriend?”

“Hey, so I know this is not normal PATH train behavior, and you clearly went to considerable lengths before stepping out of the house to indicate to the world that you wish to keep to yourself, but I couldn't help but notice you and thought, 'Man, I bet she's really hot under there.' I'm Travis, what's your name?”

From here, it's pretty much a straight shot to Relationshiptown, or the much more coveted Bonezville, USA. Once you've scored those digits and she's clanged off to her next destination, you can bet you'll soon be on a date, hitting it off, forming a deep emotional connection, heading back to her place, carrying her up to the bedroom, then removing her greaves, her aventail, her cuisses, her plackart, her coif, her chausses. and her haubergeon and getting down to business.

Just avoid making common mistakes, like approaching nervously, giving up too easily, or not leading the conversation. If you run into any trouble spots, just remind her that in the 15th century, women were rarely allowed to speak at all.