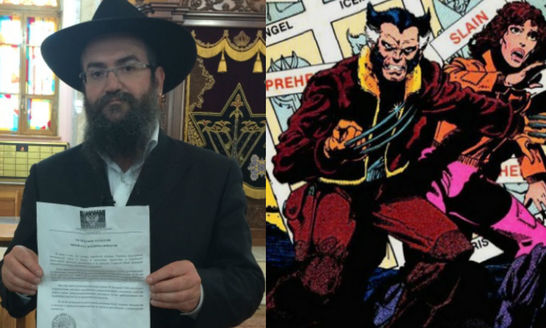 Photo by Eric Stoffel
April 17, 2014 - This week's incident in Donetsk, Ukraine, wherein hooded men outside a synagogue handed out leaflets to local Jewish citizens regarding their supposed need to register with state officials, has raised hackles in the international community. In the wake of the event, historians and scholars of global politics have cited the parallels with perhaps the most widely regarded example of state discrimination, namely the introduction of the Mutant Registration Act (MRA) in Uncanny X-Men #181.

“It is a scary time for our people, but an all too familiar one for fans of Marvel comics,” said Rabbi Pinkhas Vyshedsky, chief Rabbi of the Donbass region. “Now I know how it must have felt for Professor X to have to explain to his students at the Xavier School for Higher Learning that their rights may be in jeopardy.”

While the authenticity of the document has been categorically discredited, its appearance made national news, sparking sharp reactions from both traditional and social media. Many reporters and bloggers cited the legislation championed by Senator Robert Kelly, which would have forced vulnerable mutants to reveal themselves and their mutant powers to the public, as a textbook example of the harm such policies could inflict.

Some in the region suspect Vladimir Putin's forces of running a covert program of intimidation against several minority groups. When the Muslim Tatars of Crimea had crosses etched into their gates back in March, they noted the parallels to the 'Friends of Humanity' and other such anti-mutant groups, working in the shadows to further the goal of homo sapien supremacy.

While the Russian government and its sympathizers on the western border have not unveiled any sort of anti-minority agenda, scholars abroad are warning Ukrainians against complacency. "Onlookers in Donetsk need to remain vigilant in the face of what may appear to be half-measures," said Steven Purnell, professor of history at Rutgers University. "Some well-meaning legislation may be a diluted version of past proposals, such as in the case of the Mutant Control Act, which oversaw the expansion of the Sentinel program, inevitably leading to the events of Days of Future Past that forced Kitty Pryde to send her mind back in time to warn the X-Men of the 1980s.

"The past is the key to preserving our future,” Purnell stressed, “as Miss Pryde and Bishop clearly exemplify."

Denis Pushilin, leader of the Donetsk People's Republic who supposedly signed the registration document, seemed affronted by the accusation. “I refuse to be lumped in with the Robert Kellys and Bolivar Trasks of the world who would target innocent civilians, whether with threatening leaflets or with an army of hunter-killer robots,” he said. “That is not how our organization operates, and it never will be, even if we had the funding.”

But Jews of the world remain on edge, fearing that those who forget comic book canon are doomed to enact it. In the years since 1984, many skeptics have even denied the relevance of Uncanny X-Men #181, some going so far as to say that it may as well never have been published. This denial comes despite heavy depiction of the MRA in Hollywood, particularly in X-Men as well as X2, when a mind-controlled Nightcrawler attacked the Oval Office with his teleportation powers, threatening to end mutant-human relations for good.

Political insiders report that, in a move designed to appeal to minority groups who feel threatened by Russia's familiar tactics, Putin intends to have metal grafted to his entire skeleton, complete with retractable claws.