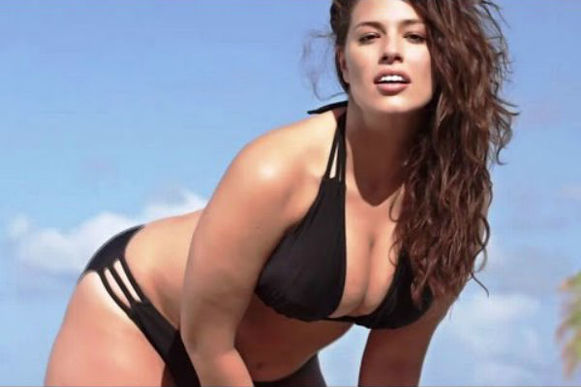 Photo courtesy of Sports Illustrated
February 16, 2016 – On Monday, Sports Illustrated magazine unveiled its annual swimsuit issue, which featured three variant covers, including one presenting the publication's first ever plus-size model, Ashley Graham. The groundbreaking new societal standard set by SI means that any woman, up to or below a size 16, can now be considered bone-able.

“This year, we wanted to take the magazine in a new direction,” said SI Swimsuit editor MJ Day. “Our intent was to push the boundaries of what can be considered attractive, by taking it right up to the limit, the breaking point if you will.

“I think our perverted degenerate readers will agree that, with the introduction of Ms. Graham into the cultural lexicon, we've marginally expanded the definition of hotness to include curvy-but-not-the-least-bit-overweight women who had heretofore been shunned by the opposite sex.”

SI had previously only featured Ms. Graham as a commercial model inside the actual magazine, a place few ever see due to the need to pay for the magazine and to actually open it. This year she made the cover, sending a message to men and women alike that you don't need to starve yourself to be considered hot; you just have to have perfect skin and hair, hardly any clothes on, an airbrush on hand, and you never actually get to go swimming.

“I previously wasn't sold on the idea of fat chicks like Graham cluttering the covers of my favorite almost-nudie mags,” said Greendale law student and notable creep Jeremy Phlerg. “I used to spend all my time ogling the exposed ribs of models on the covers of various competing sex publications, and the rest of all my time posting reprehensible comments on lesser-read websites about uggos and liberals and whoever else was on my mind that day.

“I still do all that stuff,” Phlerg clarified, “but now I save all my juiciest vitriol for the gross monsters size 17 and above. Seeing as Graham is now on the cover of my favorite societally accepted boner mag, I can totally see myself giving her the business. With my dick, you understand.”

Stating that they are now committed to this new trend of history-making forward thinking, Ms. Day and the rest of the SI editors say that they're putting their best minds to work on next year's cover, to decide if America is ready to find non-white women attractive.