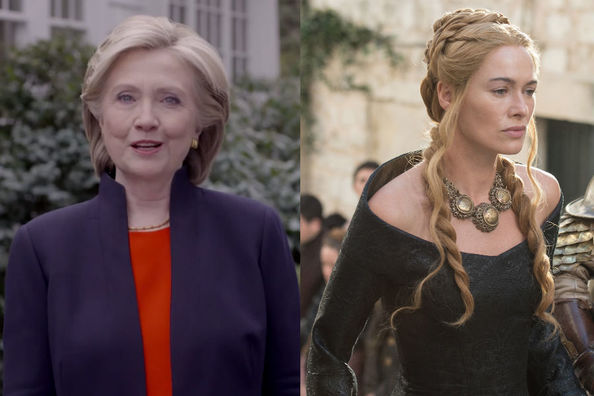 April 13, 2015 – Advertising throughout the previous week that she would be making a major announcement on her website, former Senator and Secretary of State Hillary Clinton sent shockwaves through the political world with a video in which she totally ruined the plot of Sunday night's Game of Thrones.

“I want to let the American people know that HBO has something really special in store for them tonight,” Clinton told her viewers, with nary a 'spoiler alert' mentioned. “You'll get plenty of dragons, plenty of Peter Dinklage, plus a weird flashback, which is admittedly an odd change of form for the series.”

In lieu of any important announcement, Secretary Clinton went on to describe the entire 59 minutes of television, throwing in specific details which many of her supporters might have liked to avoid knowing before the 10 PM premiere. Several Clinton fans admit to having hoped the announcement might come at the end of the video, and so kept watching in vain.

“If she runs, I'm still going to vote for her a year and seven months from now, but that was seriously messed up the way she ruined the brothel scene,” said longtime supporter Jillian Borscht. “I can't help but worry that, as president, this sort of behavior might seep into her addresses to the nation, or even her State of the Union speech. I don't want her re-telling all the jokes from the Broad City season 5 finale when she should be discussing foreign policy.”

Some families and activist groups had gathered in houses and offices to watch the announcement together, which led to an audible groan of frustration when Clinton revealed the fate of Mance Rayder.

“What is most interesting about that last five minutes is that it seems to represent yet another departure from the books,” she went on, never for a second considering that her most ardent advocates might not have read the books either. “It seemed to signify that we should assume nothing and expect a twist at any time, something I feel very confident in doing.

“So what will be the fate of our cherished series? You may think there's something I'm not telling you, which is true, but will have to wait til next week. Will it be the full plot of episode two, or something else entirely? You'll have to tune in to find out!”

Secretary Clinton has often confessed to being a big fan of Game of Thrones, a series about political dynasties with strong name recognition fighting ugly battles for the ultimate seat of power.