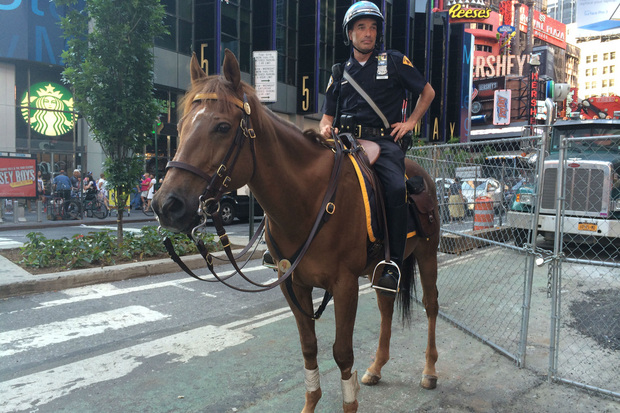 Photo by Mikael Page
July 2, 2014 - Hear ye o hear ye, humble citizens of Manhattan, for a tale of unbridled heroism did transpire this fair morn, neath the pale light of the M&M Store. At approximately 9:40 AM this balmy Wednesday, a courageous chase down 7th Avenue did occur, which culminated in one of New York's finest mounted officers apprehending a group of ne'er-do-wells, and setting free the fairest maiden in all the land.

Officer Archibald “Archie” O'Hara, a most gallant officer and the finest rider of the 18th Precinct, sat atop his steed “Swaggerton” in front of Lindy's Cheesecake, scouting for trouble, and posing majestically for photos by Asian tourists. It was then that the equine's ears perked up, and O'Hara knew this would be another day of daring escapades.

“When my charge sensed danger, I knew it was time for action, for our bond is strong as the smell of a halal cart,” Officer O'Hara told reporters following his epic pursuit. “That's when I saw, from the corner of my eye, a Honda Civic come screeching past Tad's Steaks. At first I thought, 'another reckless rapscallion new to the city, but lo, that's when I heard a woman's voice screaming for help!”

Indeed, the three knaves had that morning captured Teresa Weintraub, of the Murray Hill Weintraubs, and intended to hold her for ransom at their Soho flat, else set sail from South Street Seaport for international waters. But these villains did not count on Officer O'Hara, and his steel resolve.

O'Hara put the spurs to his steed, who let out a spirited whinny, and immediately gave chase. The pair quickly gained on the desperately driving scalawags, who, upon seeing the officer in pursuit, opened fire with Tec-9 automatics. The officer remained unruffled.

He swiftly came alongside the vehicle, dispatching the rogues' weaponry with his nightstick, before leveling his taser at the driver and incapacitating him. As the car spun out of control and onlookers leaped to avoid it, O'Hara spotted a small Puerto Rican child still in the line of danger. Not thinking twice, he sped his horse to outrun the spinning locomotive, scooping the helpless child into his arms moments before impact.

And o, but did a cacophonous cheer erupt from the assembled masses, a celebration of the officer's heroism, and the triumph of good over evil for another day, in the glow of the Toys “R” Us megastore.

“I offered the gentleman a kiss as a reward for his gallantry,” said a smiling Weintraub, now freed from her vicious captors. “But he insisted that true heroes need no reward, and that true gentlemen ask a lady in the proper setting. Also that it's against the NYPD fraternization policy.”

“This sort of thing is commonplace for our mounted unit, but we in the NYPD never let true valor go unrecognized,” said Deputy Inspector John Hart of the Midtown North Precinct. “Tonight, may the hallowed halls of the 47th St. Olive Garden reverberate with the sound of O'Hara's name!”

For now, however, it falls to the officer to complete the remaining six hours of his shift. “Hopefully that's the last deadly car chase I'll engage in today, but I'm not holding my breath,” O'Hara told reporters, before Swaggerton reared neighing on his hind legs, took a large dump in front of the 42nd St. Dave & Buster's, and sped off down the road in search of more adventure.