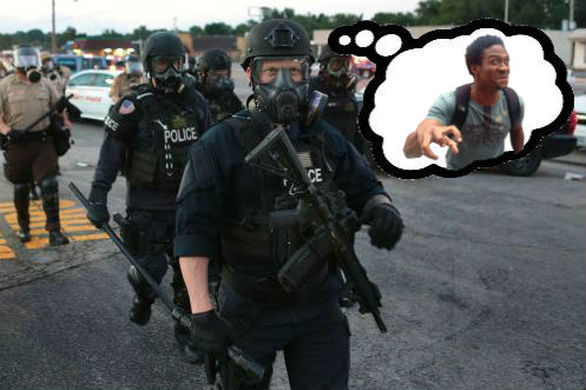 Photo by Robert Cohen
August 15, 2014 – The protests following the killing of teenager Michael Brown in Ferguson, Missouri by police have given way to looting and disorder. In response, local law enforcement has broken out the surplus military gear spilled over from the Pentagon and suited up in order to handle any conceivable threat. One officer in particular, Lieutenant Perry Perkins of Ferguson, feels confident that he'll be able to effectively subdue the biggest, meanest, most fully loaded black man his limited imagination can conjure.

“This is it,” Perkins reportedly thought to himself, on approach to West Florissant Avenue in the back of the county department's BearCat armored transport. “All of our irrational fears have come true, and now it's up to me, and me alone, to confront a mob of angry black folks carrying machetes or AK-47s, or simply flipping over cars with their bare hands. Thank goodness for the federal military-transfer program, which provided me with this armor, and this rifle with which I have very limited experience.”

The rifle, an M16 semi-automatic, is most commonly carried, though not fired, by US military personnel in foreign engagements. Thus it is considered by Perkins and many of his peers to be the ideal firearm for calming a large crowd of protesting African-Americans, some of whom may possess razor-sharp teeth and the ability to pull a man's heart from his chest with a single krav maga flourish.

“I don't want to hurt anyone,” Perkins declared internally, “but I have to consider the possibility that my tactical body armor, despite arguably being superior to armor granted to US troops in Iraq, will not be enough to withstand the protruding claws of a young black man who has injected himself with some hybrid form of crack and steroids. It pays to come prepared.”

Perkins, whose mind has been honed by many years of superstitious reasoning, admits to himself that he may not know much about black people, but that is all the more reason to fear what awaits him as the armored truck comes to a stop. “If it comes down to a shooting match with these unarmed protesters, so be it. This little baby should be able to outgun any of them what tries to hypnotize me, or spits that blinding poison like the dilophosaurus from Jurassic Park. Man, dilophosaurii are awesome.”

When informed that local police would soon be replaced by highway patrol, rather than feeling shame or embarrassment, Perkins thought fondly of returning to his family way out in the suburbs, where these types of problems rarely arise.

“Hey, our neighbors the Garcias are Cuban, and they seem really nice,” Perkins pondered rather suddenly. “Then again, it would be racist for me to generalize about all minorities, so I'm still scared.”