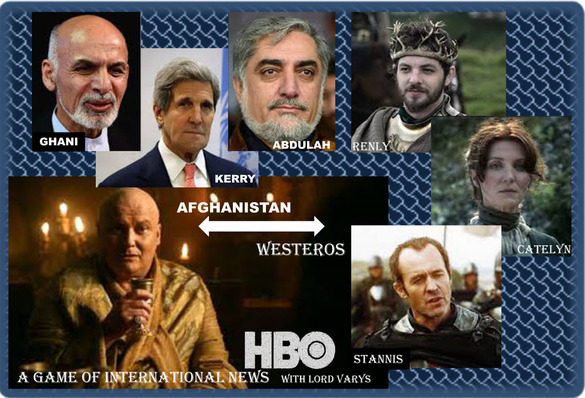 
August 14, 2014 – Early Thursday, HBO Chairman and CEO Richard Plepler announced plans to expand HBO's recent entrance into creative news programming with the addition of a bi-weekly program devoted to international news. The new program, along with Last Week Tonight with John Oliver, will round out the cable channel's creative news credentials.

Spicing up what can otherwise seem a dull and meaningless exercise for the average American, this program will relate all international news stories to storylines from HBO's successful Game of Thrones franchise. The program will be co-executive produced by George R.R. Martin and Jon Stewart, who seems to have a knack for sneaking his perspective into all of today’s creative news programming.

In keeping with this approach, Conleth Hill - Lord Varys in the Game of Thrones - will anchor the show in character. Showrunner Cindy Konutchin said, “What better way to have international news presented than as a snide, conspiracy-laden commentary, much as the Fox News team does daily.”

An example of the type of story you can expect is John Kerry’s shuttle diplomacy with the two Afghan politicians claiming the presidency after the recent election. This can easily be compared to Catelyn Stark’s failed attempt to resolve the feud between the Baratheon brothers following King Robert’s untimely demise.

“Everyone knows how well that diplomacy mission turned out,” waxes Lord Varys. “Marauding hordes of ISIS fighters in the Middle East - White Walkers south of the Wall; and Queen Elizabeth’s refusal to step down - Lysa Tully’s reticence to leave the Eyrie; Lord Tywin - President Putin.”

Richard Plepler notes: “Although the focus of the show will be to characterize each report by referencing a specific Game of Thrones narrative, we plan to have occasional 'Special Reports,' alluding to other popular HBO shows such as The Sopranos, Boardwalk Empire, and even True Blood.”

When briefly interviewed for this article, George R.R. Martin stated: “Don’t worry, there won’t be any spoilers for fans who are only following the show – no comparisons to plot lines beyond season four will be made.” When asked if this endeavor would further delay his writing production, Martin smiled and said not to worry, he was only executive producing this show, which they hope to launch in the Fall. “Because, you know…Winter is coming.”